This Month in New Bern - October 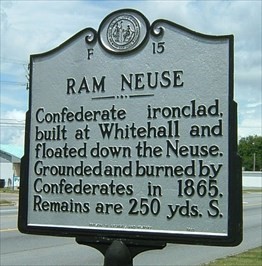 Two Carteret County men who came to New Bern in the 1800's established lucrative businesses and eventually became partners, leading to a historic event of the Civil War in eastern North Carolina.  Who were these men and what was significant about the month of October 1862?

Thomas Sparrow Howard began his marine business in New Bern and by 1860 he employed 25 workmen in his shipyard.  Elijah W. Ellis came to New Bern in the early 19th century and established a turpentine manufacturing business.  These two successful men eventually entered into a shipyard partnership.  On October 17, 1862 a contract between Howard & Ellis Shipbuilders of New Bern and the Naval Department of the Confederacy was signed.  The Confederate Navy commissioned the building of an iron gunboat, the CSS Neuse, to help prevent the Union from further occupying eastern Carolina via its rivers and shores.  Although the United States Navy had clear superiority due to their vast number of ships, the Confederate Navy hoped to reduce that advantage by building ironclads since they had already been proven in battle.

Howard and Ellis chose a piece of ground along the north side of the Neuse as a construction site across from the small village of Whitehall, now known as Seven Springs.  The timber was supplied locally and the keel was laid by November 1862.  Work continued throughout several months, and by February 1863, Howard & Ellis Shipbuilders were given their third and fourth payments from the Naval Department.  During April of 1864, the CSS Neuse was completed and patrolled the Neuse River, but in its attempt to navigate to New Bern to retake the town, it became stuck on a sand bar half a mile below Kinston.  When the CSS Neuse was finally freed a month later, there was no hope to retake the town from Federal forces.  Toward the end of the war, the CSS Neuse was involved in the Battle of Wyse's Forks just outside of Kinston.  The men were instructed to destroy the gunboat to avoid capture and the crew scuttled it on March 11, 1865 and it sank to the bottom of the river. The ship was recovered from the Neuse River by a few local men assisted by the community between 1961-63.  The State of North Carolina acquired control of the CSS Neuse in 1964 and what is now known as the CSS Neuse Civil War Interpretive Center officially opened in 1966.

So what about Ellis and Howard?  After the Civil War ended, Elijah W. Ellis requested reimbursement for his losses during the war, but he was denied by the Federal Government.  Ellis continued his naval stores businesses, died a wealthy man and was buried at Cedar Grove Cemetery.  Thomas S. Howard remained involved in cotton ginning, grist and saw milling as well as ship building and accumulating property.  He was married several times and, ironically, his last marriage was to Elijah Ellis' daughter, Ann.  He served the city for many years as a councilman, then Mayor.   Howard died suddenly in December 1890 at the age of 69, and was also buried at Cedar Grove Cemetery.