A young African American barber from New Bern died in France in this month, 101 years ago.  His name is etched on a monument at the Craven County Courthouse.  Who was he and what was his story? 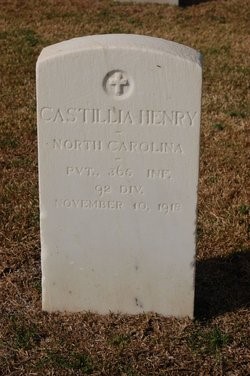 Born in December 1896, Castillia Henry grew up with his parents and siblings at 90 ½ Queen Street in New Bern.  His father, Castillia Henry Sr., had a variety of jobs: as a drayman (wagon driver), porter, and stevedore.  His mother, Henrietta Fisher Henry, died prior to 1910 and Castillia continued to reside with his father and siblings.  During this period he became a barber, working with his brother Amos.

During April 1917, President Woodrow Wilson declared war on Germany.  Castillia registered for the draft and on 1 April 1918 was inducted into the Army in New Bern.  He was sent to Camp Grant, Rockford, Illinois to begin training, and within two months found himself on board the Agamemnon on his way to France, along with other members of Company A of the 365th Infantry, 92nd Division of the Army.

The 92nd Infantry Division consisted of approximately fifteen thousand officers and soldiers.  The Division was organized in October 1917 at Camp Funston, Kansas and included African American soldiers from all parts of the United States.  Units were segregated and due to prejudices of the era, most African Americans were assigned to labor companies.  The 92nd and 93rd Divisions were the only all African American divisions allowed in combat in the United States Army during World War I.  Before they left for France in 1918, the 92nd received the name "Buffalo Soldier Division" as a tribute to the Buffalo soldier regiments that fought in the US Army on the frontier during westward expansion.  Native Americans had dubbed them Buffalo soldiers due to their tenaciousness as well as their physical appearance.

Castillia's unit was deployed to the front lines in France during August 1918 as part of the American Expeditionary Forces, which fought alongside the British and French armies in the Meuse-Argonne Offensive, one of the last Allied offenses of the War.  This immense military offensive began on September 26 and ended when Armistice was declared on November 11, 1918.  The deadliest campaign in US history, the offensive claimed the lives of over 26,000 American soldiers.  The last push took place from November 10-11 and the 92nd Division was ordered to take the heights in Champey.  During this mission, on November 10, 21-year-old Private Castillia Henry was killed in action.  Sadly, it was just one day before the Armistice. 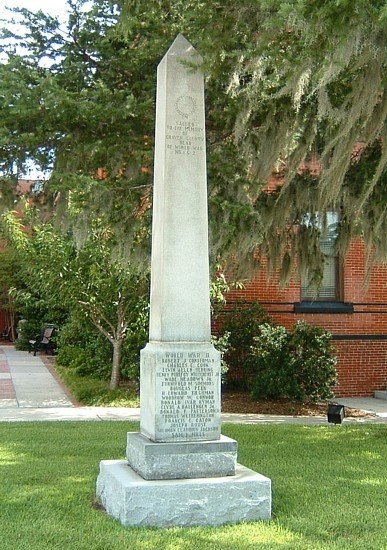 Henry was buried at the American Cemetery in St. Mihiel, France.  On 13 May 1921, his remains were disinterred and sent to Antwerp to be transported aboard the Wheaton to Hoboken, New Jersey.  His body was received by his father on 30 July 1921 and Private Castillia Henry was finally laid to rest at New Bern National Cemetery, Section 12, Grave 3434.  His name was later engraved on the World War I monument on the grounds of the Craven County Courthouse which honors those who lost their lives in the Great War.

During this month of Thanksgiving, let us remember young Castillia Henry and all those who sacrificed their lives for our freedom. Grave of Castillia Henry, killed in action in France, November 10, 1918.