This Month in New Bern - September

Born in the month of September, a thirteen term U.S. Representative from New Bern left an immense 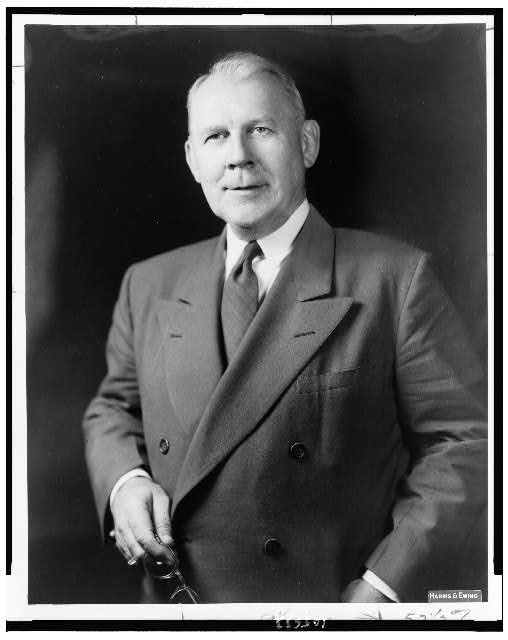 economic legacy in eastern Carolina that lasts to this day.  Who was this man and what did he do to benefit this area?

Graham Arthur Barden was born in Turkey Township, Sampson County, on September 26, 1896.  He served in the Navy during WWI and in 1920 graduated with a law degree from the University of North Carolina.  He established a law practice in New Bern the same year and also began to teach at the high school.  He became the high school football coach and coached New Bern teams to finals in football, baseball, and basketball.  His happy-go-lucky disposition earned him the nickname "Hap."  Barden was the football coach during 1922 when New Bern played in the eastern championship game in Raleigh.  During the game a devastating fire soon dubbed the "Great Fire" had broken out in New Bern and the fans heard about it when a Raleigh newspaper "Extra" addition was distributed around the stadium.  When the coach heard about the fire he sent someone out and bought every paper in the stadium so his team wouldn't hear about it.  New Bern won the game 6-0 and anxiously headed home when the news was shared.

Barden soon became a Craven County Judge.  He ran and served as a state legislator and in January of 1935 was elected to Congress as a Democrat, representing North Carolina's Third Congressional District.  He was incredibly popular and was elected and reelected with little or no campaigning on his part.  He became an expert in education and labor and soon became the head of the powerful Education and Labor Committee for a decade.  He helped to pass the Barden-LaFollette Act which made vocational training possible for all types of physically handicapped people and he also led the passage of the Taft-Hartley Act as well as the Landum-Griffin Act which were designed to control corruption in labor unions. 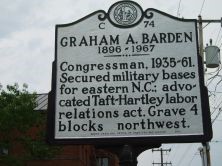 Barden was described in his day as an ultra-conservative.  He distrusted bureaucracy in Washington, as well as inflation and corruption and did not want governmental intrusion in the everyday life of his constituents.  While not all of his positions were universally popular, he was deeply admired for his devotion to the people and well-being of eastern North Carolina.  His most enduring legacy was the acquisition during his tenure as congressman of three major military bases during the 1940's: Cherry Point Marine Air Station in Havelock, Camp Lejeune Marine Base in Jacksonville, and Seymour Johnson Air Force base in Goldsboro.  The eastern Carolina area had suffered huge economic losses in such areas as tobacco, textile and manufacturing.  The acquisition of those military bases provided employment for thousands of eastern north Carolinians and a huge economic boon for the area.  Thus, New Bernian Hap Barden's legacy endures to this day.

Despite being begged by colleagues to remain in Congress, Graham Barden retired on January 3, 1961 and spent his remaining years with his family in New Bern, fishing on the Trent River.  He died in 1967 and is buried at Cedar Grove Cemetery.