For over a century and a half, this historic house was home to members of three prominent New Bern families: Chapman, Attmore, and Oliver.  The house, known locally as the Attmore-Oliver or “AO” House, was built in two stages.  The initial construction is believed to date from about 1790 and the enlargement of the building about 1834-1835. 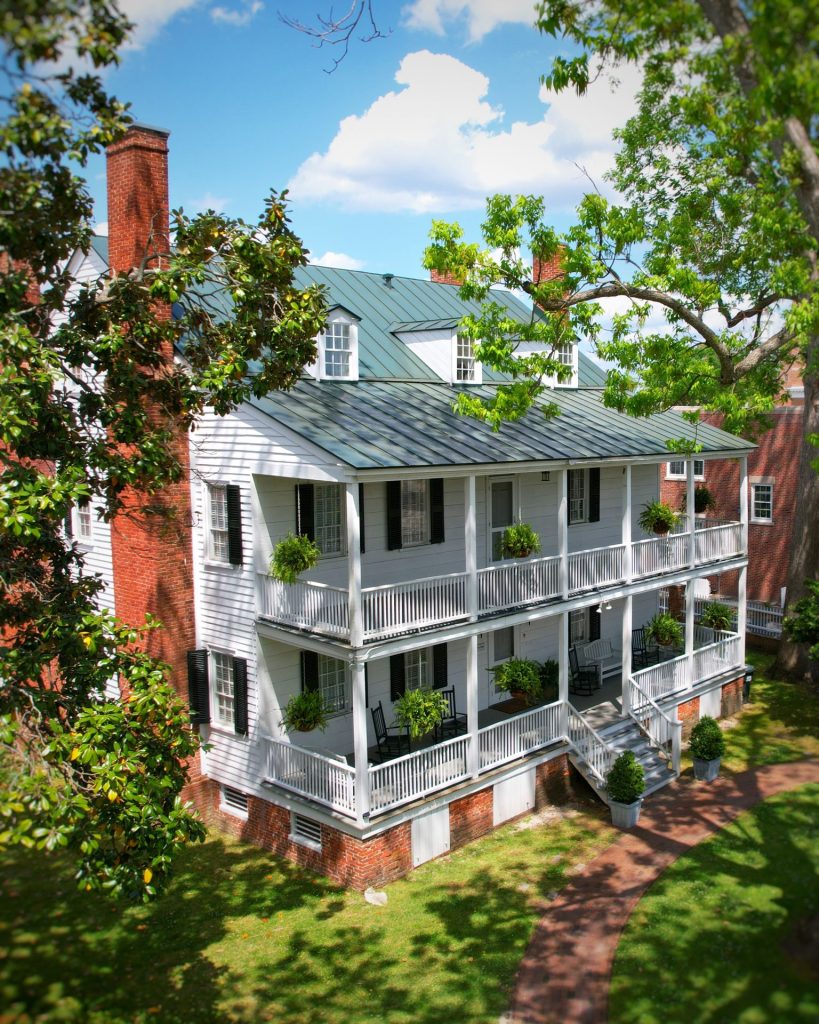 The original house was built for Samuel Chapman, a retired officer in the Continental Army and clerk of the Craven County Supreme Court.  It was a story and a half frame building in a vernacular cottage style. Regrettably, no images of the structure survive.  At Chapman’s death in March 1807, the house passed to his daughter Caroline.  In 1834 Caroline, who had moved to New York, decided to sell her New Bern properties.  The buyer of the Broad Street house was Isaac Taylor, a prominent New Bern maritime merchant.  Taylor purchased the building for his daughter Mary, her husband, George Sitgreaves Attmore, and their young family.  With the size of their family already increasing, the Attmores may have found the original 1790 building too small.  The enlargement and modification of the house probably occurred about this time.

The new building incorporated the original structure and also introduced elements of the newly fashionable Greek-Revival style.  The Attmore-Oliver House is one of the earliest examples of this popular architectural style in New Bern.  The rear façade of the house, with its two-story porch and unornamented finish, echoes the appearance of the original house.  It is in high contrast to the elegant Greek-Revival front façade.

When Isaac Taylor died in 1846, the Broad Street house passed to his daughter Mary Taylor Attmore and her husband, George S. Attmore, and eventually to their eldest child, Hannah Taylor Attmore.  Hannah and her husband, William Hollister Oliver, were the next occupants of the house.  Their daughter, Mary Taylor Oliver (1859-1951) inherited the house in 1908.  “Miss Mary” was the last family member to reside in the Broad Street house.  On her death in 1951, the property was willed to her nephews, who sold it to the Historical Society in 1953.

The majority of the AO House is used as administrative offices for the Society.  The open portions of the house contain a small collection of photos, artifacts, and 19th-early 20th century period furnishings.  Click here to download a self-guided tour of the AO House.  Limited displays are available for self-guided touring by appointment only during business hours, Monday through Friday, 10 am until 4 pm (in summer, office closes at 1 pm on Friday).  Please call at 252-638-8558 to inquire.

The New Bern Historical Society has been landscaping and adding gardens that reflect the era of the Attmore-Oliver House and that will contribute to the dignity and serenity of our property for many years to come.  In 2007, NBHS undertook a landscape design plan incorporating the stately mature pecan, magnolia, and crape myrtle trees that framed the grounds.  The focus was to add local southern plantings that were original to the site in years past.  Generous donations by many members of the Historical Society and New Bern residents have made this a reality.  A real blessing was locating Lavinia Cole Roberts' 1885 plant list for her gardens.  Roberts was an avid gardener whose family owned the Pollock Street house that anchors this garden and whose brother-in-law, Captain William Willis Roberts, was responsible for bringing the Lycoris Radiata or Spider Lily to New Bern and North America from Japan.  Many of the plants from Roberts' list were located on this very site, including fifteen old roses.

For a step back in time, we invite you to come and visit our heritage gardens, open daily during daylight hours.  They are a city block deep so you can enter from 512 Pollock Street or the NBHS front gate located at 511 Broad Street.  And, if you enjoy gardening or just want to spend some time in the fresh air, we would love to have your help as a garden volunteer.  Contact the office if you would like to be a one of our Earth Angels who lovingly maintain this gracious space.