New Bern has had many “firsts” over the years – among them, first printing press and postal service in North Carolina and first registered nurse in America. In January 1829 New Bern celebrated the arrival of a another exciting historical premier. However, by May of 1830 the acclaimed novelty had disappeared from the annals of New Bern history, and its fate remains a mystery. Perhaps you can help us determine its destiny. 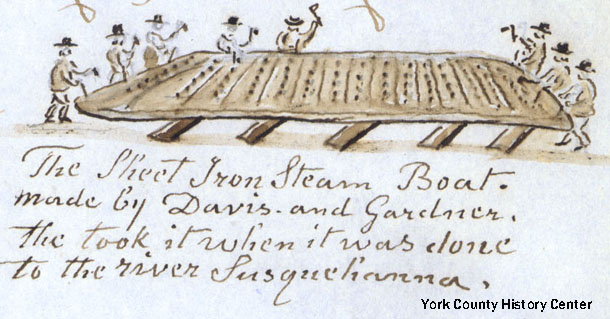 In 1824, a group of Baltimore businessmen wanted to determine the practicality of running steamboats on the wild and erratic Susquehanna River. They advertised in Baltimore papers, requesting proposals for navigating the length of the Susquehanna. John Elgar from York, Pennsylvania, had an audacious solution. He determined that iron was better than wood and invented the first iron steamboat in America. Christened the Codorus, after a creek that ran through York County, this ship was launched at Accomack on the Susquehanna on November 22, 1825. In a maiden voyage of three months and 300 miles, Elgar was able to navigate the Codorus to Binghamton, New York, traveling through treacherous waters and falls. The boat remained afloat the entire way, but it appeared to be impractical and not lucrative financially to pursue commercially on the Susquehanna. Though it remained on the river for two years doing odd jobs, it had no permanent employment. The businessmen decided to sell it and it was purchased in Baltimore for $650 by a North Carolina promoter, C.V. Swan in New Bern, among others. Their plan was to connect New Bern and Beaufort via the newly opened Clubfoot and Harlowe Creek Canal.

In December of 1828, the voyage to New Bern began. The Codorus traveled on the Chesapeake Bay to Hampton Roads, past Norfolk and then on the Elizabeth River near the Dismal Swamp Canal. Fortunately, the Dismal Swamp Canal had just reopened, and the Codorus was the second ship to come through it. This was fortuitous because the depth of water had to be low for the Codorus and she would not have been able to traverse the Atlantic Ocean. 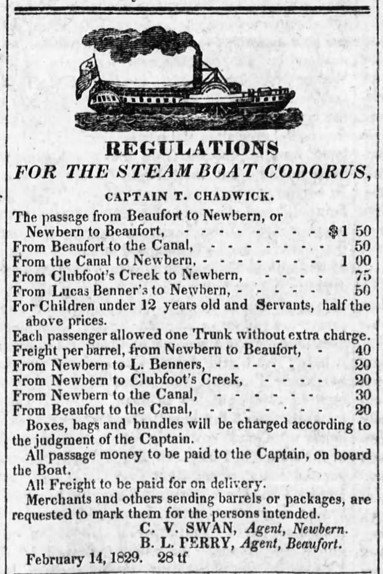 On January 24,1829, the Newbern Sentinel of Newbern, NC reported that the Codorus had arrived and on February 7, 1829 she was advertised as ready for service. A ride from New Bern to Beaufort under Captain T. Chadwick was to cost $1.50, the same cost as a stagecoach. Children under the age of 12 and slaves rode for half the price and the first trunk was free. The freight charge was 40 cents per barrel. On its second trip from New Bern to Beaufort there were 16 passengers as well as freight. The owners thought about running the steamer on the Neuse to Smithfield as well.

The townspeople loved her, but apparently not enough to keep her afloat financially. Patronage was poor, and after just a year in operation, the owners decided to sell her. On May 1, 1830, an advertisement in the New Bern Spectator indicated that one half of the Codorus was for sale; with one of the owners leaving North Carolina, he would sell his part of the boat “on the most advantageous terms.” It was also suggested that it “might be employed to great advantage in towing boats with produce and merchandise up and down the Neuse and Trent rivers.” The New Bern Spectator waxed poetically, “But the Codorus, the Beaufort steam packet Codorus, over whose every movement and transmogrification we have watched with the solicitude of early love, is laid up in ordinary for the want of patronage. We are in great grief on the occasion and feel like taking to our bed.” (The Raleigh Register, 6 May 1830) 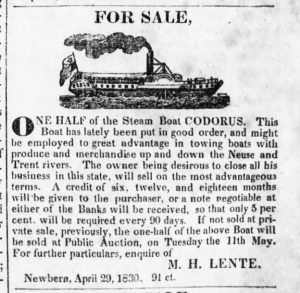 The last advertisement in the New Bern Spectator of May 8, 1830 stated ominously “If not sold at private sale, the one-half of the above boat will be sold at public Auction on Tuesday, the 11th of May.” 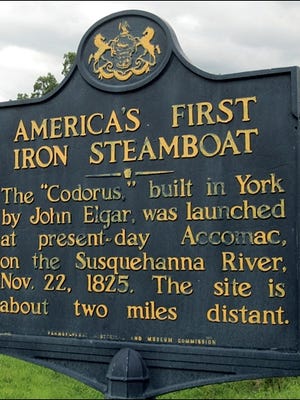 And that is the last reference we have been able to find regarding the Codorus. Was she sold to a private buyer prior to auction and repurposed? Was she sold for scrap? Did someone purchase her at auction? The Codorus appears to have been lost to New Bern and American history in May 1830, one hundred and ninety-one years ago. While many articles and journals have praised Mr. Elgar for his iron-hulled steamboat invention, no one has been able to determine the ultimate outcome of the famed Codorus. Do you know?