While the inhumanity of war is clear, sometimes acts of humanity during war take us by surprise. One such example is that of Confederate Captain Mayo and his captor, Union Major W. B. Lowell. This is their story.

On March 14, 1862 while the Battle of New Bern raged, four miles south of New Bern stood Fort Ellis, a Confederate fort on the Neuse River where Brinson School currently stands.

Commanding the fort was Captain John Micajah Mayo of the NC 2nd Artillery Regiment, Co A (also known as the NC 36th Regiment, Company F, nicknamed "The Pamlico Artillery"). When the Federal troops broke through the Confederate defenses on the battlefield, General Branch rode on horseback in great haste to the fort and ordered Mayo to destroy his guns and magazine. With over 3,000 pounds of powder and 500 loaded shells in the magazine, it was critical that this ammunition not fall into the hands of the Union Army.

Time was short - the Union was approaching. Quickly Captain Mayo sent his men out of the fort and away from danger and lit the trail to the explosives himself. Unfortunately, he was not far enough away from the blast site when it ignited, causing a massive detonation, described as the largest explosion of the battle. By all estimates, Mayo was thrown at least 100 feet through the air. Both of his legs were broken, his flesh and eyes severely burned, and his body badly mangled. He was reported as being killed.

That night Captain Mayo was found by Major W. B. Lowell of the 11th Connecticut Infantry who was immediately drawn to this man and the courage he displayed, sacrificing himself for the mission instead of risking his men. Major Lowell had Mayo moved through Union lines to the hospital where he was treated by Dr. James B. Whitcomb. Major Lowell greatly admired Mayo's heroism and told fellow officers, "He's our prisoner, of course, but he shall never need a friend so long as I live. He voluntarily faced that terrible death rather than require it of one of his men."1

Lowell visited Captain Mayo every day, wrote dictated letters to Mayo's mother, read out loud and played the violin for hours. One evening, while grasping Lowell's hand, Mayo stated, "It seems impossible that we were ever enemies, a brother could not have been kinder nor more self-sacrificing." 2 Despite his severe injuries, Mayo was discharged from the hospital after six months. Impressed by this young Confederate officer, Union General Ambrose Burnside arranged to dine with Mayo before his departure and personally arranged for a special escort to return him to his family farm in Edgecombe County, North Carolina, where he continued to recuperate.

Amazingly, Captain Mayo recovered and extended his service, this time with the NC 4th Cavalry where he was appointed a Major. At the battle of Upperville, VA in June 1863, he was captured and sent to prison. He spent time at two prisons until February 1865 when he was transferred to City Point, VA for exchange. While he was a prisoner at Johnson's Island Military Prison near Sandusky, OH, he kept a detailed journal of prison life. He wrote two volumes, one of which, August 1863 - March 1864 is in the Manuscript Division of the Library of Congress. It is deemed to be one of the best accounts of prison life during the Civil War written by either side in the conflict. The other has been lost.

After the war Mayo returned home to Edgecombe County, NC to practice law (prior to the war, he had studied law at the University of Virginia). He married Florence Lyon and had 8 children. In 1886 he moved with his family to Ocala, Florida and became a land speculator and officer for a new railroad looking to expand its services.

Meanwhile, Major W. B. Lowell wrote to a Confederate Veteran Magazine, in which he told the story of his meeting and becoming friends with Mayo. He related, "I hope he lived through the war if he was ever able to go in again and if alive will write me. …we always found him a gentleman and a man of most wonderful nerve.3

Unfortunately, that reunion was not to be, as Mayo was killed by a train in 1897 in Florence, SC. He was buried on the old Mayo farm near Whitakers, NC. His grave was unmarked until a memorial service in 2000 conducted by Camp 771 of the Sons of Confederate Veterans from Wilson, NC unveiled an official Veterans Grave Marker for Major James Micajah Mayo. 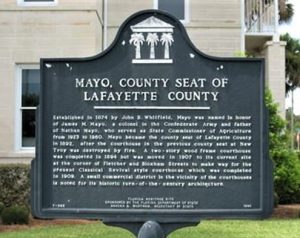 In a little town near the Florida Panhandle is located the county seat of Lafayette County - Mayo, Florida. The plaque in front of the local Court House commemorates the fact that the town is named for Confederate officer James Micajah Mayo. One of his sons, Nathan Mayo, was the Florida Commissioner of Agriculture for 37 years, the longest tenure in the office's history.

If you would like to hear more about Captain Mayo and other powerful stories of courage and conviction, please join us at the New Bern Historical Society's Lantern Tour at the New Bern Battlefield site on April 9-10. Click here for details.