You've walked past it countless times -- you know, the big red brick building on the 200 block of Craven Street with "City Hall" emblazoned near the roof.  Built in about 1817, the Stephens Brick Block building is considered the earliest surviving commercial structure in downtown New Bern.  Most locals know it as Old City Hall, as it served as the seat of city government and even a fire station from 1888 until 1935.  Recently, a team of local history hunters discovered an even earlier use for the old building, hidden in plain sight -- the building served as both a Confederate and Union hospital during the Civil War.  We're delighted to share the story of the research that led to this discovery.

Historian and author Wade Sokolosky recently discovered several wartime documents that identified a military hospital on Craven Street, "next to the Progress Building."  (The New Bern Daily Progress was a local newspaper during that time.)  After many discussions, much research, and a little bit of luck, it was determined that the Brick Block Building located at 220-226 Craven Street was first used by the Confederates beginning in January 1861.

The January 31, 1862 edition of the New Bern Daily Progress reported "the rooms adjoining the Progress building have been taken for a hospital and are being overhauled and refitted for that purpose under the supervision of W.A. Holt, Confederate Surgeon.  The Dr. is a man of … judgment as will be seen, not only by the internal arrangement of the building but by the improvement in the way of cleaning up, whitewashing etc…."  The Branch General Hospital, as it was formally identified by Confederate authorities, operated through the Battle of New Bern fought on March 14, 1862.  On the day of the battle, Surgeon Holt labored to remove his patients to the Atlantic and N.C. Railroad depot in town, where they were evacuated toward Kinston.

Upon occupying New Bern, Union authorities impressed several local buildings for use as hospitals.  In a report published in the Boston Medical and Surgical Journal, Volume 66, 1862, Surgeon Samuel E. Kneeland of the Union Army wrote: "[O]n Sunday, March 16, I was ordered to get the Craven-street Hospital ready for the reception of the wounded in that battle.  The building was an old three-story warehouse which had been used as a hospital by the Confederates.  I found about 150 bedsteads, with beds and coverings in a most filthy condition; one man dead, and another dying, left by the rebels in their hurried flight.  I pressed about a dozen contrabands, and had the building scrubbed from top to bottom, and all the beds and clothing aired and sunned."

This past January, the Brick Block Building's owner graciously allowed several of us to tour the building.  While sharing with us a general history, the owner shared that he was puzzled by the presence of "whitewashing" in only a portion of the building.  Research had revealed only a section of the building had served as a hospital.  Civil War hospitals were routinely whitewashed (painted white) to enable better lighting at night, as well as for observing cleanliness.  Remarkably, because the hospital part of the building had been closed off for decades and subsequently spared from later modifications, it was like a time capsule.  To see the whitewashed walls was truly like stepping back in time. 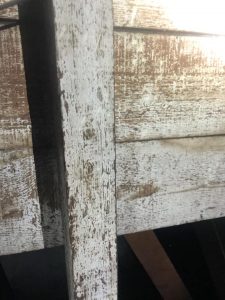 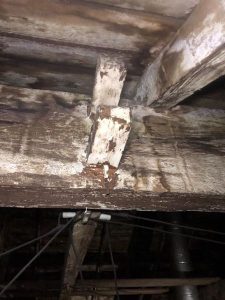 This indeed was the hospital!  There we were, standing in a building that had previously served 156 years ago as a wartime hospital.  More significantly, it was one of three known North Carolina hospital buildings from the Civil War still standing, not counting historic homes or churches that were used temporarily as hospitals.  This exciting revelation further adds to our knowledge of the existence of Civil War hospitals in Eastern Carolina and enriches the significant history of New Bern.

Sokolosky, a well-known local historian and author, is in the process of completing a two-volume series that discusses the history of Civil War hospitals in the Old North State.  The first volume titled North Carolina Civil War Hospitals: Confederate is due out in 2022.

Those who worked together to solve this mystery and discover the hospital were Wade Sokolosky; Nathaniel Glasgow, a recent graduate of Appalachian College; Claudia Houston, Historian of NBHS; and Jim Hodges, NBHS Curator, along with the owner of the Brick Block Building.  It should be noted that the former hospital is on private property and not available for public viewing.  We are currently pursuing the locations of two other Confederate Hospitals here in New Bern prior to the Union occupation.