In February 1864, in an ironic turn of events, the Tuscarora Indians participated in a pivotal Civil War battle on the very land near New Bern that they had been forced to leave nearly 150 years prior. 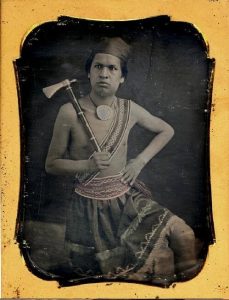 The Tuscarora people lived in eastern North Carolina before the Europeans arrived here in the seventeenth century.  They initially lived together in peace, but due to differences in cultures, encroachment of land by settlers, kidnapping and enslavement of native people, conflict broke out resulting in the long and bloody Tuscarora Wars from 1711-1715.  The Tuscarora suffered a huge defeat at their fort, Neoheroka.  Forced from their land, many Tuscarora migrated to New York, becoming the sixth tribe of the Iroquois nation.

In New York, the Tuscarora were eventually forced from their homes and moved by the Federal government to reservations.  When tribesmen attempted to enlist in the Union Army in 1861, they were repeatedly rejected from military service by New York recruiters citing the lack of a specific law allowing Native Americans to serve.  It should be noted, however, that recruitment of Native Americans took place in other states in the north, like Pennsylvania.

Cornelius C. Cusick, chief of the Tuscarora, appealed to federal officials.  He and other Iroquois persistently lobbied the government and as the Union Army was clamoring for more recruits, the ban on Native American enlistments was finally lifted.  Cusick became a member of Company D of the 132nd New York State Volunteer Infantry which was popularly called “the Tuscarora Company.”  Twenty-five Native Americans from five reservations served in this company, including Isaac Newton Parker, whose father, Chief William Parker, had served with the Americans during the War of 1812.

A natural leader, Cusick came from a proud and educated family.  His grandfather had served as a bodyguard and interpreter for the Marquis de Lafayette during the American Revolution and Cusick himself spoke eight Indian languages.  He eventually became a first Lieutenant of Company D.  On December 28, 1862, the regiment boarded transports to New Bern.  The Iroquois soldiers found themselves in the precise area where their tribe had been removed 150 years prior and much to their surprise, they camped near a settlement to the west of New Bern named Tuscarora.

In February 1864, the unit’s mettle was tested.  General George Pickett and the Confederate Army attempted to retake New Bern from the Federal Army which had occupied the city since March 14, 1862.  There was to be a three-pronged attack by various generals and their brigades.  Confederate General Robert Hoke with six thousand men would march east between the Neuse and Trent rivers to New Bern.  The only thing in their way was the thinly stretched line of the 132d NY Regiment at Bachelor’s (Batchelder’s) Creek, about eight miles from the city.

At Bachelor’s Creek there was a small federal outpost commanded by Lieutenant Abram Haring, consisting of a blockhouse and breastworks on both sides of the road that crossed the Neuse River bridge.  It was a rainy, foggy night when the Confederates attempted to cross the bridge.  Although vastly outnumbered, Haring and his men repulsed the Confederates three times.  Just as they were running out of ammunition, the Tuscarora Company arrived to reinforce Haring.  But even with the arrival of additional companies of the 132nd the Federals were forced to retreat to New Bern.

Although the Union gave up their position at Bachelor’s Creek, the fierce six-hour fight delayed the arrival of additional Confederate troops at New Bern.  This upset General Pickett’s plans to retake the city for the south, eventually resulting in his withdrawal the next day.  The 132nd NY Tuscarora Company was specifically cited for their bravery and heroic actions that day, and Abram Haring would be awarded the Medal of Honor for his heroism.

The 132nd NY participated in two major battles and three significant skirmishes during their time in eastern North Carolina, including in the fight at Jackson Mills, Battle of Wise’s Forks, and several attempts to wrest Kinston from the Confederacy.  The fighting soon ended as they joined Sherman’s army in Goldsboro, and then moved to Raleigh at the time of the surrender of North Carolina Confederate forces at Bennett’s farm.  The unit was discharged finally in June 1865 and returned to New York.

The irony remains, however.  The Tuscarora Company was led by a Tuscarora chief back to his people’s native land to fight Carolinians who had expelled them a century and a half earlier.