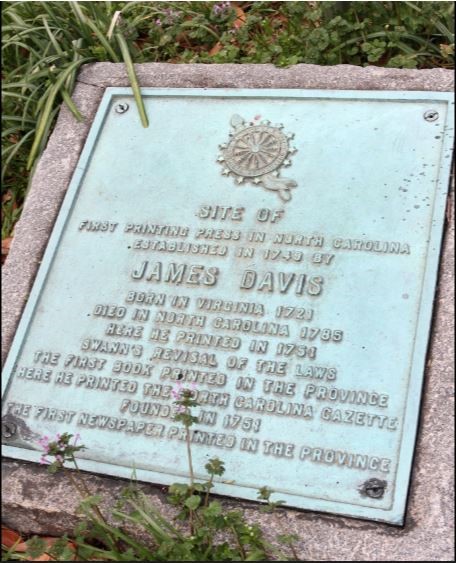 New Bern is the site of many significant "firsts" - first provincial convention in America held in defiance of British orders, North Carolina's first capital, first postal service, first free public school, and first black-owned bank. During the month of June in the year 1749, New Bern was the site of a major new institution that had a profound cultural and political impact on the future of the Old North State.

Prior to the mid-eighteenth century, information and news in North Carolina were passed through word of mouth and handwritten records. As the population grew and towns formed from rural areas, the provincial government found the handwritten, incomplete and error-filled colonial laws inadequate. After voting to revise the laws, the Assembly hired James Davis of Williamsburg, Virginia, and on June 24, 1749, Davis arrived in New Bern to become North Carolina's first public printer.

Davis had likely apprenticed under William Parks, at that time Virginia's first and only printer. The printing press Davis brought with him to New Bern from Williamsburg was the first to be used in North Carolina. He initially set up shop on Pollock Street, but later moved to the southwest corner of Broad and East Front Streets. In 1749, Davis printed the first official publication for the colony entitled The Journal of the House of Burgesses of the Province of North Carolina.

Davis was also responsible for printing the colony's first currency. In 1751 he finally completed the revisal of the colonial laws. While completing his public printer duties, out of financial necessity he supplemented his income by private printing. In 1751, Davis began publishing the first newspaper in the colony, the North-Carolina Gazette, with the motto, "With the freshest advices, foreign and domestick," which he produced until 1760. Davis started another newspaper in 1764, called The North Carolina Magazine; or, Universal Intelligencer, but it only lasted four years. In 1768, he resumed publication of The North-Carolina Gazette, which continued to be printed until 1778.

In 1753, Davis published a book, A Collection of Many Christian Experiences, Sentences, and Several Places of Scripture Improved, written by Reverend Clement Hall. This book was a first in several categories: the first book written by a native of North Carolina and the first privately printed, non-legal book published in the colony. Davis served as North Carolina's public printer for almost thirty-three years and published over one hundred documents in that time.

While he was a prolific printer, Davis also wore many other public hats. In 1753 he became a member of the county court, an office he held for over 25 years. In 1754 he was elected Sheriff of Craven County, leaving that position after ten months upon his election to the Assembly. He was later appointed New Bern Postmaster and served as a justice of the peace from 1768-1778. Davis was a supporter of the American Revolution and during this period was appointed to numerous influential political positions representing New Bern and Craven County. He reached the zenith of his political career with his 1781 appointment to the Council of State, North Carolina's powerful executive branch.

James Davis' appointment in New Bern as the state's first public printer ushered North Carolina into a new world of information sharing between the state and the rest of the world, brought its citizens unprecedented access to news and ideas, and bound together the colony's patchwork of isolated rural areas into a single political entity. He died in New Bern in 1785 and is buried at Christ Episcopal Church. Inscribed on his gravestone is the following:

Established the art of printing in the Colony of North Carolina,1749
Public printer to the Colony and the State
Published first book, first newspaper and first magazine in North Carolina
Member of the Council of State
Of the General Assembly
Of the Provincial Convention
Of the Provincial Congress
And of the Committee of Safety for the County of Craven and Town of New Bern
Judge of the Admiralty Court
Justice of the County Court
Sheriff of Craven County
Postmaster and Contractor to convey the public mails from Suffolk to Wilmington
Printed currency for the colony 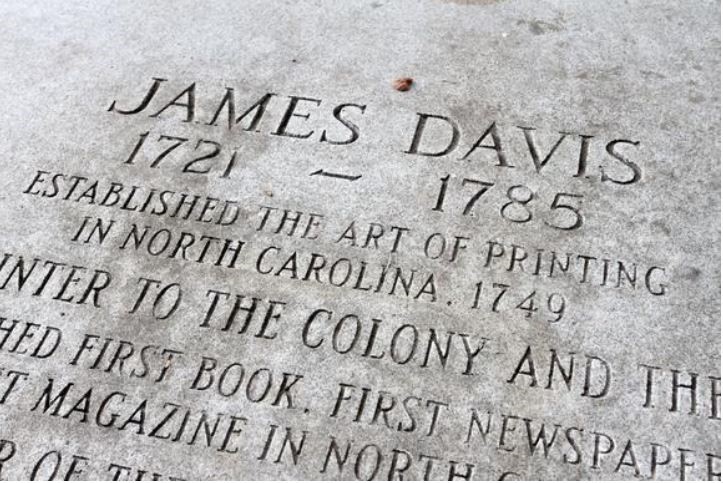