What person from a famous New Bern family was promoted to commodore in the US Navy on 1 July 1870 and had a destroyer in WWII named after him?

Our notable person for July is Fabius Maximus Stanly, the son of John Stanly and Elizabeth Franks 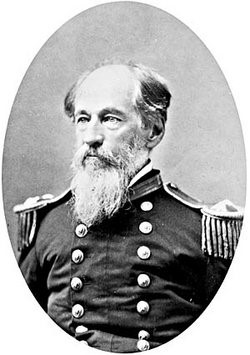 Stanly, born in New Bern on 15 December 1815.  The Stanly family had quite an illustrious history.  John Stanly was a merchant, orator, lawyer and representative to Congress.  He is probably most notorious for having shot and killed ex-Governor Richard Dobbs Spaight in a duel here in New Bern.  John and Elizabeth had fourteen children, five of whom died young.  There were eight living sons: Alfred, Frank, Edward, Alexander Hamilton, Fabius Maximus, Marcus Cicero and James Green.  The only daughter to reach adulthood was Elizabeth Mary Stanly who, against her father's wishes, married Captain Walker Keith Armistead, who eventually served as Chief Engineer for the US Army Corps of Engineers.  They had one son, Brigadier General Lewis Addison Armistead, who died at Gettysburg, famously leading a Confederate charge at Seminary Ridge.

Fabius Maximus Stanly entered the navy as a midshipman candidate in 1831 and served in naval squadrons from the Mediterranean to Brazil.  He passed as a midshipman in 1837 and was commissioned a lieutenant in 1841.  Fabius sailed on board the Steamer Princeton for a year and then was sent to the frigate Congress as part of the Pacific Squadron.  He served in many places during the Mexican War, taking part in the capture and defense of San Francisco and assisting in the capture of Mazatlán.  Stanly received the thanks of two secretaries of the Navy for his service in the Mexican War.

Ironically, Fabius Stanly got in trouble over a duel.  His superior officer, Commander Zachariah F. Johnston had agreed to a duel with Stanly, but then backed out.  Stanly called him a coward and unfortunately put it in writing in a newspaper.  In 1851 Stanly was tried before a general court martial, found guilty and sentenced to be dismissed from the Navy.  The court, however, recommended executive clemency and President Millard Fillmore reduced his sentence to twelve months suspension from service.

Stanly sailed on numerous ships in many different areas but found himself in trouble again in 1860 while commanding the steamer Wyandotte.  Although he successfully prevented the capture by secessionists of Fort Taylor in Key West, Florida, the administration of James Buchanan relieved him of his command due to "excessive zeal."

Stanly served the Federal Navy with distinction during the Civil War, and rose through the ranks as captain of the Tuscarora in 1866 in the South Pacific Squadron.  He was promoted to commodore in July of 1870 and then rear admiral in February 1874, retiring in June of that year after 49 years of service.  He died of heart disease in Washington DC on 5 December 1882 and is buried at Oak Hill Cemetery in Washington.

The USS Stanly, a destroyer, was completed at the Charleston Navy Yard in 1942 and named in Stanly's honor.  The Stanly earned nine battle stars and the presidential unit citation for service in WWII for "extraordinary heroism in action against enemy Japanese forces during the Solomon Islands Campaign, from 1 November 1943, to 23 February 1944."