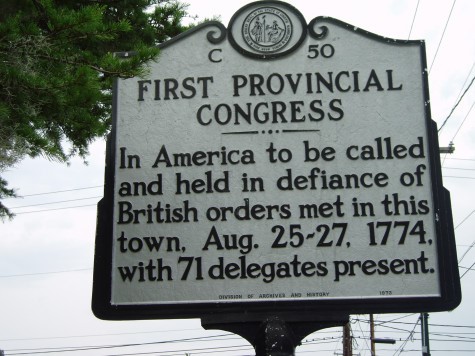 New Bern is well known for its many significant “firsts” – North Carolina’s first capital, first printing press, first newspaper, first published book, and first postal service, among others.  But one “famous first” in August of 1774 had a tremendous impact upon the future formation of the state of North Carolina as well as the United States of America.  What was this historic event?

To set the stage, the colonial resistance movement against the British government culminated with the Boston Tea Party in December of 1773, which greatly angered Great Britain.  By June of 1774, Parliament passed a series of punitive laws in retaliation that became known as “The Intolerable Acts”.  North Carolinians joined the other colonies to support opposition to Parliament’s retaliatory measures against Massachusetts.  North Carolina’s colonial leaders agreed to meet in New Bern, the colonial capital, to outline their concerns, plan further opposition to Great Britain and choose delegates to the Continental Congress to be held in Philadelphia.  Several men were elected to represent Craven County: Richard Cogdell, Joseph Leech, and Lemuel Hatch.  Isaac Edwards and Abner Nash were elected to represent New Bern.

On August 25, 1774, North Carolina’s First Provincial Congress met at the County Courthouse in New Bern with seventy-one delegates present at roll call.  It was the first such meeting held in any of the thirteen colonies.  The meeting took place near Tryon Palace, the residence of Royal Governor Josiah Martin, who was not invited to attend.  Although he received daily reports about what transpired during the assembly, he made no attempt to stop the meeting.  The moderator of the First Provincial Congress was John Harvey, who presided over delegates from thirty of the then thirty-six counties, as well as additional members from six towns.

The New Bern Resolves issued by the First Provincial Congress declared that, while they remained loyal to the King, they repudiated the Intolerable Acts, deeming British taxation “highly illegal and oppressive”.  To protest Parliament’s actions against New England, the provincial congress approved a trade boycott of all British goods.  It then endorsed a general congress for the provinces and nominated Richard Caswell, William Hooper, and Joseph Hewes to represent North Carolina in the First Continental Congress scheduled in Philadelphia for September 1774.  The provincial congress also recommended the formation of local committees of safety which would better enable communication.

These first five congresses were a testament to the North Carolina colonists’ determination to become self-governing and to their readiness to achieve that goal.  The First Provincial Congress was a “first” not only for New Bern, but directly led to the formation of our current state government, the first meeting of the North Carolina state Legislature on April 7, 1777 also in New Bern, and ultimately, the establishment of the new nation.