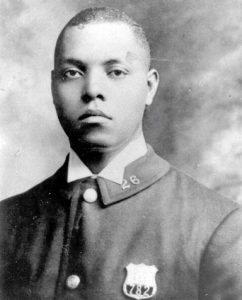 Samuel J. Battle was born in New Bern on January 16, 1883. Weighing in at 16 pounds, he was recorded as the largest baby born in North Carolina. Samuel would eventually grow to be 6”3” tall and over 280 pounds. By the time of his death in New York City in August 1966, the reputation of this legendary New Bern son was even greater than his towering stature.

Battle’s parents were born into slavery, and he was one of nine siblings. As a teenager, he was caught stealing money from the safe of his boss, I.H. Smith. His boss did not press charges because of his friendship with Battle’s father Thomas, a Methodist minister. Smith predicted Battle would be in prison within a year, but Samuel was determined to do everything in his power to prove him wrong.

Battle went north and had several jobs, including as a $32/month red cap at Grand Central Terminal. Influenced by his brother-in-law, Moses Cobb, a police officer for the City of Brooklyn, Samuel decided that he too wanted to become a police officer. Though he was initially turned down for the job, in 1911 Samuel J. Battle became the first Black to be appointed to the 10,000-member force of the newly-merged New York City police force.

Battle faced enormous discrimination in the department – years of silence, ostracism, even death threats. Initially assigned to the West 68th Street station, he was not allowed to bunk with the other officers at the station house, so a mattress was moved to the second floor, where, though isolated, he studied for the Sergeant’s exam. Although he was passed over three times, he would later become the first Black Police Sergeant (1926), Lieutenant (1936) and Parole Commissioner (1941). Battle served on that commission for ten years, finally retiring in 1951. 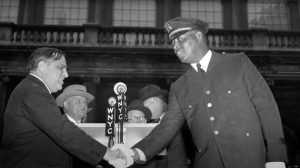 While on his first beat in the San Juan Hill section (where Lincoln Center is today), tourists on sightseeing buses would stop and gawk at NYC’s first Black policeman. Undaunted by racial barriers, Sam served heroically and with distinction. In 1919, he rescued a white police officer during a battle with rioters at 135th and Lenox Avenue. In 1935 Battle helped to quell a riot in Harlem which was started by the arrest of a 16-year-old shoplifter. As a Parole Commissioner, Battle initiated rehabilitation programs for the delinquent youth of Harlem.

When Battle retired from the New York City Police Force in 1951, he was the highest-ranking Black on the force at that time. In 2009, the corner of West 135th Street and Lenox Avenue in New York was renamed Samuel J. Battle Plaza in honor of his achievements. That street corner marked the location where Battle saved the white officer’s life during a racial skirmish in 1919.

But there’s more to this story. As part of my research with the New Bern Historical Society, I recently created the Battle family tree in Ancestry, an online genealogical site. I was contacted by a woman named Tina Lechner-Gibbons, who shared this wonderful account: 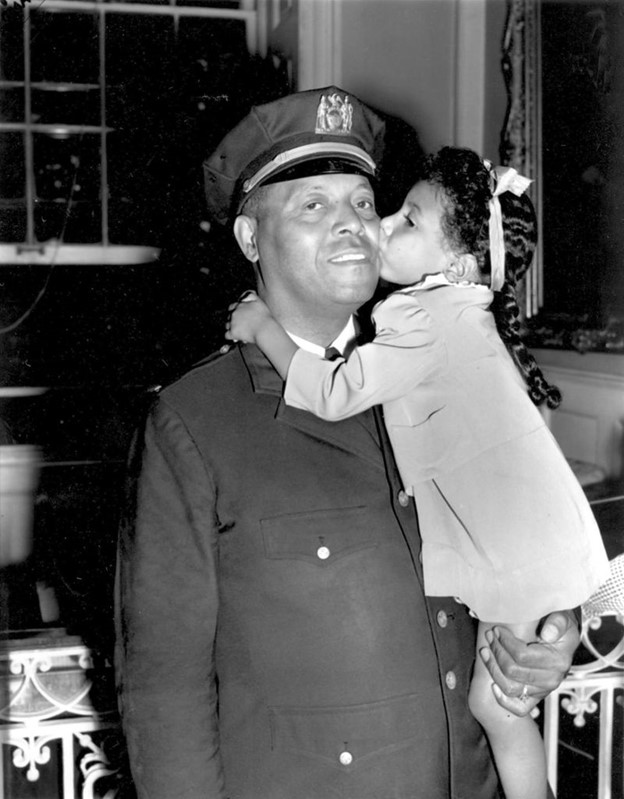 "On Friday, June 19, 1925, my mother was 5 years old and living in Brooklyn. She, her brothers, and her mother were walking home from the store when a tragedy happened. Her mother was killed by a trolley car. A kind policeman helped the children - he stayed with them and took care of them while everything was going on around them. In 2006, when my mother (that 5-year-old girl) was lying in a hospital bed dying, she started to tell me about that day and the policeman. She remembered, he was a big black man and his name was Officer Battle. She kept talking of his gentle way - his kindness and how she wouldn't forget him. Mom died a few days after that, I never forgot what she told me, and today while I was writing some of our family histories, I researched that officer and found his story - then searched on Ancestry - and found this tree. I just want to say what I'm sure my mom would want to say - Thank You."

If you want more information about this amazing man's four-decade odyssey, read his biography by Arthur Browne, One Righteous Man: Samuel Battle and the Shattering of the Color Line in New York.