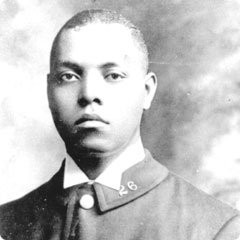 Samuel Battle’s parents were born into slavery, and he was one of nine siblings. As a teenager, he was caught stealing money from the safe of his boss, R.H. Smith. His boss did not press charges because of his friendship with Battle’s father, a Methodist Minister. Smith predicted Battle would be in prison within a year, but Samuel decided to do everything in his power to prove him wrong.

Samuel Battle went north and had several jobs, including as a $32/month red cap at Grand Central Terminal. Battle was influenced by his brother in law, Moses Cobb, who was hired as a police officer for the City of Brooklyn. Samuel also decided that he wanted to become a police officer as it would provide him the ability to support his young family. Samuel J Battle became the first African American to be appointed to the 10,000 member force after the police forces merged in 1898. He was originally turned down because a police surgeon declared he had a heart murmur, but after several prominent blacks protested to city officials, he was given another medical exam which he passed. He officially joined the force on June 28, 1911 at the age of 28. He was assigned to the West 68th Street station house, but suffered years of silent treatment from his fellow officers. He was not allowed to bunk with the other officers at the station house, so a mattress was moved to the second floor where the American flag was stored. While in that room, he studied for the Sergeant’s exam. Although he was passed over three times, he would later become the first African American police sergeant (1926), lieutenant (1936) and the first African American parole commissioner (1941). Mr. Battle served on that commission for ten years, retiring in 1951.

While on his first beat in the San Juan Hill section of the city (where Lincoln Center is today), tourist buses would stop and point him out. He was soon moved to Harlem, where he lived. In 1919, Battle rescued a white police officer during a battle with rioters at 135th and Lenox Avenue. In 1935 Battle helped to quell a riot in Harlem which was started by the arrest of a 16 year old shoplifter.

Samuel Battle retired from the New York City Police Force in 1951 at 68. He was the highest-ranking African American on the force at that time. In 2009, the corner of West 135th Street and Lenox Avenue in New York was renamed Samuel J. Battle Plaza in honor of his achievements. That street corner marked the location where Battle saved the white officer’s life during a racial skirmish in 1919. 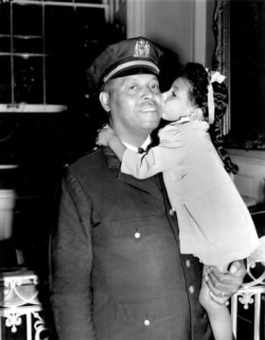 Photo of Samuel J. Battle and his granddaughter Yvonne at Parole Commission swearing in 1941