From New Bern to Pickett’s Charge

On July 5, 1863, Lewis Addison Armistead died at the Battle of Gettysburg, Pennsylvania during the midst of the Civil War. Lewis was born in New Bern to a well known and prestigious family. He was born in the home of his great-grandfather, John Wright Stanly, a patriot. Lewis’ grandfather was U.S. Congressman John Stanly, and his uncle, Edward Stanly, became the military governor of eastern NC during the Civil War. His parents were Walker Keith Armistead and Elizabeth Stanly Armistead. Walker Armistead and his four brothers all served during the War of 1812. One of those uncles, George Armistead, was the commander of Fort McHenry in Baltimore Maryland where the “Star Spangled Banner Flag” flew while the British bombarded the fort.

Lewis grew up in Fauquier County Virginia and entered the US Military Academy at West Point in 1833. He struggled academically and also was involved in an incident in which he broke a plate over the head of Jubal Early, who would be a future Confederate General. Armistead thus resigned in 1836.

Armistead returned to the Army three years later and fought out west and also during the Mexican War. When Virginia seceded from the Union, Lewis resigned his commission. This led to an emotional farewell with his closest friend, Winfield Scott Hancock. Armistead entered the service of the Confederacy on September 15, 1861 and was quickly promoted, first to Major, then to Colonel. Armistead’s first combat experience of the Civil War was at Seven Pines, and he later participated in the battle at Malvern Hill. In July, all roads, Union and Confederate, led to Gettysburg. Armistead was assigned to the division of George Pickett, and on July 3, led a charge on Hancock’s corps, at the center of the Union line on Cemetery Ridge. In what has become an iconic moment, memorialized in books, paintings and movies, Armistead removed his hat, placed it on his sword and led his brigade to the stone wall – later known as the High Water Mark of the Confederacy. Armistead was able to cross the low stone wall and temporarily broke the Union line. He was then shot and mortally wounded. The charge, which lasted almost 50 minutes, resulted in the loss of half of Pickett’s division as killed, wounded or captured.

Armistead was found by Union Captain Henry Bingham and Armistead asked that he contact his old friend, Winfield Hancock. Armistead asked that his personal effects be given to Hancock to send to his family. He was informed that his friend, Hancock, had also been seriously wounded, but would survive from his injuries. Armistead died on July 5, 1863, two days after Pickett’s charge. He was originally buried at Spangler’s farm, but was later disinterred and buried next to his uncle, Lieutenant Colonel George Armistead at Old Saint Paul’s Church in Baltimore, Maryland.

Ironically, the house that Lewis Armistead was born in became the headquarters of Union General Ambrose Burnside during the occupation of New Bern by Federal troops. 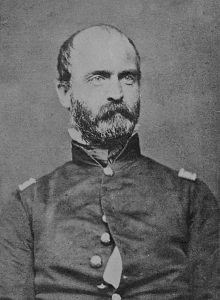