This Month in New Bern, September 2018 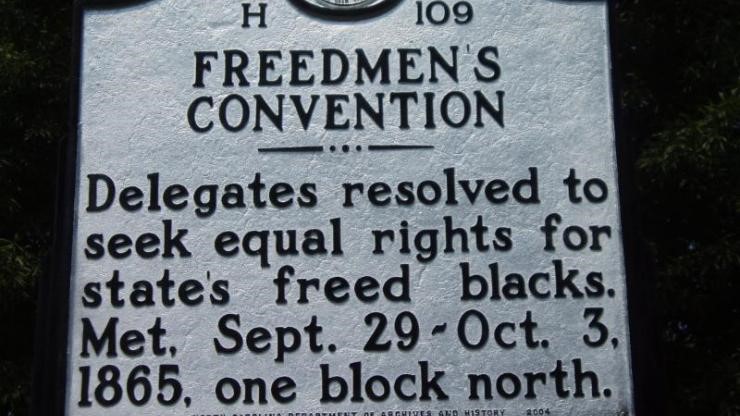 After the Civil War, as part of a reconstruction plan, William H. Holden was appointed the provisional Governor of North Carolina by President Andrew Johnson.  He was ordered to call for a state convention to restore North Carolina to the Union, and to provide for the election of a new governor, state legislators and US congressmen.  The call for elections was necessary to reestablish civil government in the state.  Other important mandates were included as well, such as the repeal of the 1861 Ordinance of Secession and ratification of the 13th Amendment.  The convention was scheduled for October 2, 1865.

Several African American ministers and property owners met in New Bern to discuss the idea of having a statewide convention for freedmen.  There were concerns that no African American delegates were chosen to attend the constitutional convention and they wanted to make sure the needs of their population were considered.  The Freedmen’s Convention then was scheduled to take place in Raleigh on September 29, 1865.  James Walker Hood, an African Methodist Episcopal Minister was elected as the presiding officer.  Hood was born in Pennsylvania but moved to New Bern in 1864 as a Church missionary and became prominent locally.  He was the founder of St. Peter’s AME Zion Church.  Craven County provided the largest number of delegates of the over 100 men from 34 counties who were chosen to attend the Freedmen’s Convention.

The convention was an attempt by the leaders to push for full political rights for African Americans, including the rights to testify in court, vote and serve on a jury.  In Hood’s acceptance speech, he called for voting rights for all African American males, but many of the delegates disagreed, including James H. Harris of Raleigh.  Harris and Abraham Galloway, a prominent African American activist in New Bern during the war, decided on a compromise resolution which called for the protection and education of African Americans and the elimination of racial discrimination.  The document also noted the importance of just labor compensation, education for African American children and reunification of families that were separated during the Civil War.  Before the end of the Freedmen’s Convention, the delegates issued a written document to the Constitutional Convention which was to meet three days later.  The document was acknowledged but no action was taken.

Before they adjourned, the Freedmen’s Convention voted to form the North Carolina State Equal Rights League and scheduled a second convention for the following year at the same time and place.  Due to his moderation and leadership, James Harris was elected the first president.  The Freedmen’s Convention of September 1865 was the first statewide assembly of African Americans in North Carolina and it all began in New Bern.