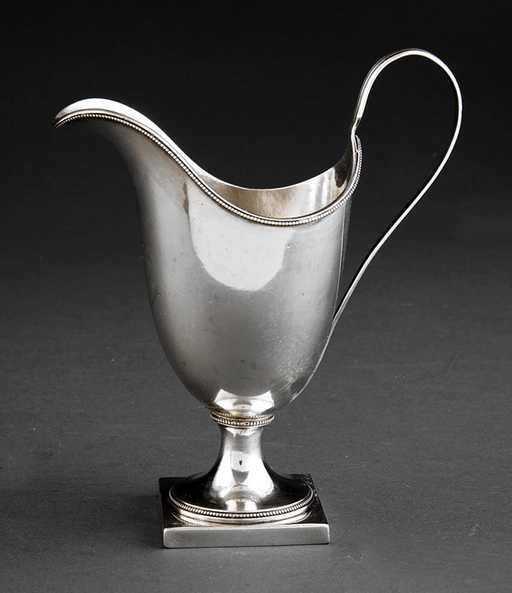 One of New Bern's finest artisans died during this month in 1834.  Who was he and how did he leave his mark on our young town?

During the 1700's-1800's, New Bern was a prosperous town filled with skilled craftsmen of all types.  Of New Bern's many silversmiths, one of the most prominent was Freeman Woods.  A native of New Jersey, prior to his arrival in New Bern he worked in New York City, listed in the New York City directories from 1791-1794 at 11 Smith Street.  By December 27, 1794 Woods had established himself in New Bern as both a silversmith and goldsmith and advertised that he started a business in which one might purchase tankards, teapots, tablespoons, sugar tongs, etc.  He was a skilled engraver and could create a piece with very short notice and in the latest style.  His lines were simple with perfect proportion.  In the Craven County Court minutes from 1800-1805, Christopher Masters and David Murdock were apprenticed under Freeman Woods to learn the silversmith trade.  Both were sixteen years of age at the time.

Not much is known about the family of Freeman Woods.  His wife, Hannah, died in October 1811 in New Bern as reported by Raleigh newspapers.  Nothing else is known about her or their children.  Mr. Woods himself died at the age of 68 on November 20, 1834 and is buried in New Bern as reported by the Newbern Spectator.  He was a resident of New Bern for forty years.  Both the New Bern Historical Society and Tryon Palace have fine examples of Mr. Woods work.  Mr. Woods is known to have made silver sugar tongs for Samuel Oliver (1781-1855) and his wife, Elizabeth Gittig who were married in 1805 in

New Bern.  Their youngest son, William Hollister Oliver (1829-1908) married Hannah Taylor Attmore (1829-1881) in 1854 and the couple lived in the Attmore-Oliver House in New Bern, now owned by and the current office of the New Bern Historical Society.

If you check your silver and you see this mark, you have a beautiful piece made by Freeman Woods.

A Freeman Woods creamer with the neoclassical helmet shape, strap handle, beaded trim and trumpet foot of the type owned by the New Bern Historical Society.