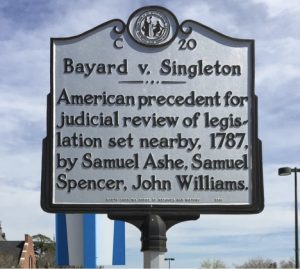 On November 26, 1787, in New Bern, a judicial milestone was set in the landmark case of Bayard vs. Singleton. The case is significant not just for the judicial precedent set in this case, but also for the number of attorneys and judges who played major roles in the history and development of our new nation.

Samuel Cornell was a wealthy merchant in New Bern and one of the richest men in the state. During the Revolutionary War, he remained loyal to the King. He refused to sign an oath of allegiance to the revolutionary cause and fled to England in August of 1775. He returned in 1777 to his family’s home in New York. Meanwhile, the NC General Assembly confiscated his land and home and sold it to help finance the war. A local New Bern merchant, Spyers Singleton, purchased Cornell’s home. The Cornell family resided in Flushing, NY where one of his daughters, Elizabeth Cornell, married William Bayard Jr. In 1787, Elizabeth Cornell Bayard returned to New Bern to file a lawsuit against the state to recover the property that had been deeded to her by her father. A lawsuit was filed on her behalf by her attorney Samuel Johnston (who later became Governor of NC). William R. Davie (who also became Governor and was known as the “Father” of the University of N.C.) assisted Johnston. James Iredell, a legal scholar, was also retained by Mrs. Bayard and he later became a US Supreme Court Justice. Spyers Singleton, the defendant, hired another future Governor, Abner Nash, as his attorney along with Alfred Moore (who would later serve on the US Supreme Court).

The essence of Bayard’s argument was that North Carolina’s Constitution of 1776 guaranteed a citizen the right to a jury trial in a case involving the loss of property rights. After the war ended, the 1783 Treaty of Paris stipulated that confiscated property would be returned to its original owners. However, in 1785 the NC legislature barred state courts from hearing lawsuits by former Loyalists trying to recover their property, contrary to the Treaty of Paris. The court, consisting of Judges Samuel Ashe, Samuel Spenser and John Williams heard the case but delayed a decision, hoping that either a settlement would be reached or the legislature would repeal the confiscation laws. After the parties could not come to an agreement, the court concluded that it could not enforce the 1785 NC statute as it was inconsistent with the Constitution. The decision was highly controversial. Richard Dobbs Spaight, one of the signers of the US Constitution, questioned whether the court had a right to overturn legislation as unconstitutional.

The court eventually ruled against Bayard, citing the fact that when her father left for England, he did not return before the General Assembly confiscated his lands. Therefore, he was not actually a citizen of the US. The court ruled that Mrs. Bayard, as a citizen in 1787 had a right to a trial, but Cornell did not have the right to deed his property to her in 1777 in the first place. As possibly the first legal decision in the new United States in which a court nullified a law because it was found to be unconstitutional, this ruling was an early example of the system of checks and balances vital to the new American democracy. Bayard vs. Singleton served as a precedent and precursor to Marbury vs. Madison, the 1803 US Supreme Court decision that established judicial review.