What Happened in New Bern in March 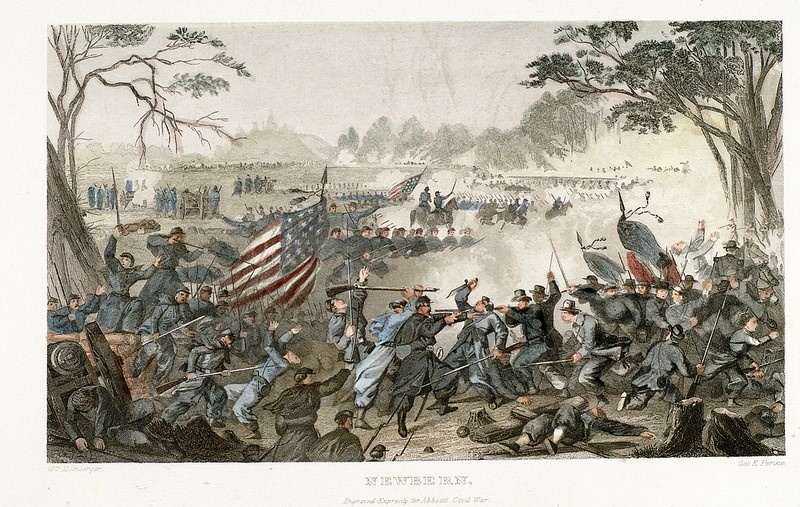 The Battle of New Bern took place on March 14, 1862.  Of the many stories of the brave Union and Confederate soldiers who fought that day, one of the most interesting is that of 21-year-old student Frazar Stearns.  Stearns was a member of the Amherst College Class of 1863, where his father, William Stearns, was the college president.  William wanted his son to become a minister, but Frazar wanted to be a scientist and was especially interested in chemistry.  Frazar's professor of chemistry, 35-year-old William Smith Clark, became an officer in the 21st Massachusetts Volunteer Infantry and encouraged many of his students to join.  William Stearns initially denied approval for his son to enlist, but finally relented on the condition that Frazar join the 21st Massachusetts and remain close to Professor Clark.  Lt. Col. Clark was in command of the regiment and 1st Lt. Stearns became his Adjutant.

On March 9, 1862, Frazar wrote his mother: "we are going to-morrow morning at daylight somewhere, - where, exactly, I don't know…always remember that any hour or any moment may bring you news that I am killed or dangerously wounded…These are horrible times, when every man's hand is against his neighbor.  But I have hope.  Let the North pray more…"  It was his last letter.

21st Massachusetts along with other troops under the command of Maj. Gen Ambrose Burnside,

moved towards the town of New Bern.  On March 12, the 675 members of the 21st led their brigade and discovered abandoned fortifications.  The 21st Regiment was directly in front of the brickyard where the Confederates had artillery pieces.  Ordered to take the position, the 21st captured part of the brickyard but had to retreat.  Clark then gave the order to "charge bayonets."  It was a bold move, and Clark received a promotion to Colonel because of it.  But the 21st Massachusetts was soon forced out of the brickyard by a Confederate brigade.  Clark then heard the news.  Frazar Stearns had been shot through the chest and was dead, along with eighteen others.  Clark was inconsolable, and General Burnside ordered that the cannon that had been captured by the 21st Massachusetts that day be given to the regiment.  They voted to give the cannon to Amherst College in memory of Frazar Stearns.

Austin Dickinson, the brother of famous poet Emily Dickinson, was a close friend of Stearns and was

greatly affected by his loss.  Stearns was eulogized, spoken of in state proclamations and honored with a large funeral.  His father wrote a novel which included his beloved son's letters and the eulogies given at his funeral.  There was much shock and grief in the closely-knit town of Amherst, and while many others from the community died, the story of Frazar Stearns is still told and his memory honored.  Ironically, the cannon that was donated in Frazar's honor was on loan to the North Carolina Museum of History in Raleigh for several years.  It was returned to Amherst in 2015 during the sesquicentennial of the Civil War's End.