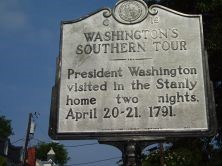 Did you know that in April of 1791, George Washington, first President of the United States, visited and slept in New Bern?

In May of 1789 Washington decided that he would visit every state in the country. By the end of August 1790 he had been to all the northeastern states but delayed a trip to the southern states mainly because North Carolina had not yet ratified the U.S. Constitution. Once that occurred on 13 Nov. 1790, he began his plans for a Southern Tour to personally observe and meet the people of North Carolina, South Carolina, and Georgia and to determine the strength of the newly formed United States of America in those areas.

Washington's one hundred day journey of one thousand eight hundred and eighty seven miles through the South began March 21, 1791.  He left in a white coach from the then United States capitol at Philadelphia and reached Halifax, North Carolina on April 16, 1791.  On the morning of April 20, the President was greeted on the outskirts of New Bern by a group of leading citizens who escorted him into town.   It is believed that he stayed at the home of the late John Wright Stanly whose home was quite elegant, though empty.  Legend has it that New Bernians opened it up and cleaned it and furnished it for the President.

The next day Washington walked around town and visited Christ Church, and the historic Cypress Tree at the end of Change Street.  Washington had requested to see this spot under which Richard Dobbs Spaight, later Governor of North Carolina, had promised aid to Nathaniel Greene during the Revolution. Washington kept a diary during the Tour, and was "exceedingly" pleased with his reception in New Bern. The town received him with cannon fire, speeches, a grand dinner and a ball at Tryon Palace, and with great respect and admiration. That afternoon, Washington was feted at a public dinner and ball at Tryon Palace at which fifteen toasts were given.  Washington left early as he was being honored at another ball at the home of Colonel Leech.  The President, a lifelong Mason, received greetings from St. John's Lodge No 2 and he responded to them on April 29, 1791.  The communication was read to all the members and entered into the minutes of the Lodge.

On February 22, 1799, five years after Washington's visit, his birthday was celebrated at Frilick's Hotel in New Bern.  It was the first such public honor of his birth and New Bernians celebrated it every year in grand fashion.  Washington's Birthday, after the President's death, became a national holiday.

George Washington saw more of this country while in office than any other American president before the twentieth century.  Hence the claim by many small towns and villages, "George Washington slept here."  But we know, in New Bern, he really did.