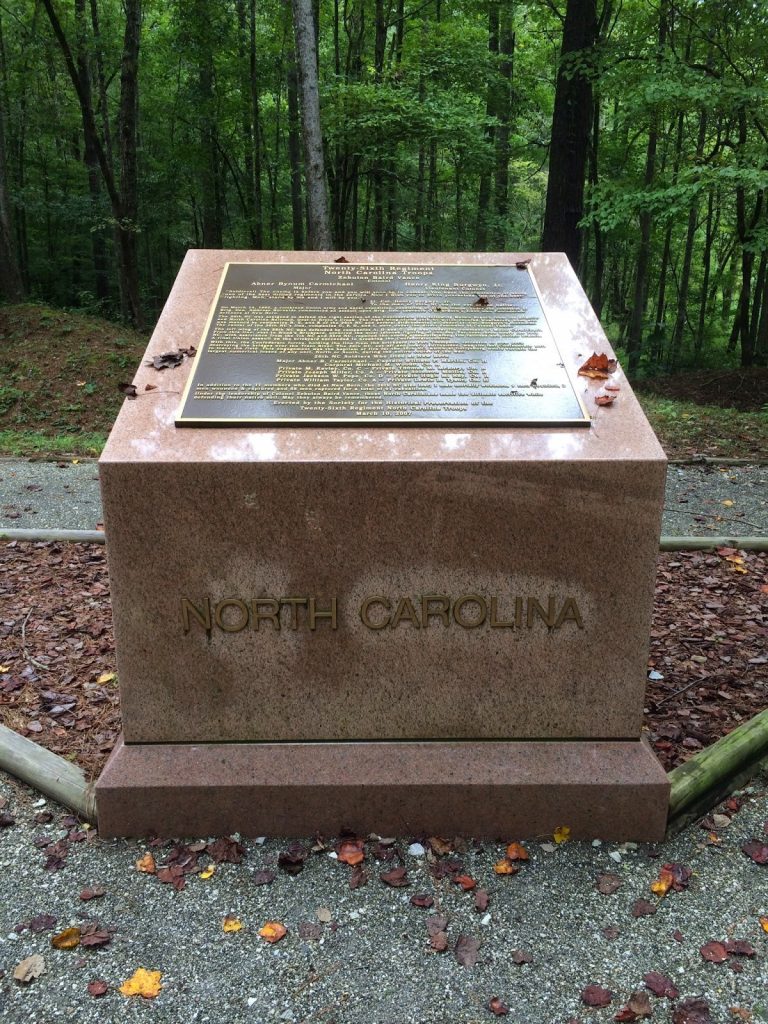 On July 1, 1863, the first day of the Battle of Gettysburg, the 26th NC infantry encountered the famed 24th Michigan, known as the “Iron Brigade.” The battle was long and bloody, but the 26th NC defeated their opponent on that day. While their courage will be forever remembered, the unit suffered unparalleled loss.
Prior to Gettysburg, the 26th NC Regiment had their first foray into battle at New Bern during March, 1862. Most of the troops were from the middle and western part of the state and they were commanded by Zebulon Vance who later became the war time Governor of NC. While Confederate forces were defeated at New Bern, the 26th NC later distinguished itself in battle.
Before arriving at Gettysburg, PA, the 26th NC had 843 soldiers, and was the largest regiment in Robert E. Lee’s Army. On the first day of the battle of Gettysburg, the 26th NC advanced at McPherson’s Ridge against the 24th Michigan. Their commander, Henry King Burgwyn Jr., age 21, known as the “boy colonel”, was shot through his lungs and killed while transferring the regimental colors. Another thirteen flag bearers were shot and one by one, every colonel, major, and captain was either killed or wounded. The only remaining officer, Colonel H.C. Albright, took command of the entire regiment. The fight between the 26th NC and 24th Michigan was the bloodiest engagement of the three day battle of Gettysburg. The 26th NC had 558 casualties out of 843 soldiers. Company E was left with twelve men, and Co F consisted of one color bearer.
On July 3, the last day of battle, the regiment again fought, this time at Cemetery Ridge. Eight more color bearers were killed or wounded, including Sgt Robert Hudspeth of Co. F. Ninety-nine men were killed in total. Despite the odds, one color bearer and Sergeant carried the 26th NC colors to the top of the slope and stone wall. The Union troops of the 12th New Jersey, out of respect for their courage, held their fire and helped them over the wall where they surrendered. On this third day, the 26th NC had numbered about 230 men. That night, only three officers and 67 men were able to answer roll call. All twenty men who carried the colors, 81 out of 82 men in Co E and all 93 men in Company F were dead. The 26th NC lost the highest number in any regiment in a single battle during the Civil War.
There are two monuments at Gettysburg in honor of the 26th NC. The monument at the Angle is the smallest, representing the tremendous loss of life from the regiment. The other, at Meredith Avenue, reflects the size of the unit after the first day battle. On March 10, 2007, the Society for the Historical Preservation of the 26th Regiment North Carolina Troops erected a monument at the New Bern Battlefield to honor the unit. It is the largest monument to the 26th NC, representing the unit at full strength.