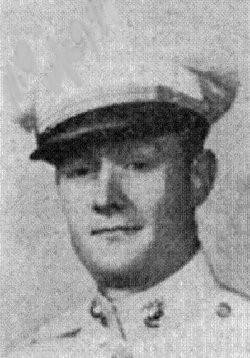 Robert J. “Strawberry” Conderman was the first person in Craven County to be killed in WWII.  He was born August 13, 1918, and upon graduating from New Bern High School, entered the University of North Carolina, receiving a bachelor’s degree in commerce and becoming an aviation cadet at Pensacola.  Upon completion of flight training he was stationed in San Diego and then Hawaii, before being transferred to Wake Island.  On December 8, 1941, (December 7, US time) the squad learned of the Japanese attack on Pearl Harbor.  Japanese bombers soon flew over Wake Island in a surprise attack shortly before noon.  As the alarm sounded, Conderman ran to his F4F-3 “Wildcat” Fighter plane but was cut down by strafing.  Fellow Marines rushed to his aid, but Conderman pointed to other wounded Marines and said “Let me go.  Take Care of them.”  He died of his wounds just hours later at the age of 23.  2nd Lieutenant Robert Conderman received the Purple Heart and is buried at the National Memorial Cemetery of the Pacific (also known as the Punchbowl) in Honolulu, Hawaii.  His name is inscribed at the top of the WWII Memorial of Craven County located on the grounds of the old county courthouse, which honors the deaths of local soldiers.

Robert’s father, Fred Conderman, was an assistant postmaster for New Bern, and he tried to enlist to avenge his only son’s death.  His age kept him out of the Army and Navy, but Marine officers accepted him as a mail officer with the rank of captain.  He joined the First Marine Division and participated in numerous assaults and campaigns in the Solomon Islands.  He was only supposed to handle the mail, but he took his off-duty time to accompany as many aviators as possible.  He contracted malaria and returned home, retiring from active service in 1946 with the rank of major and returning to his job as postal inspector.  In 1944 he received the silver Eisenhower medal for his award as “Fighting Father of the Year.”  Fred Conderman died at the age of 79 and is buried at the New Bern Memorial Cemetery.