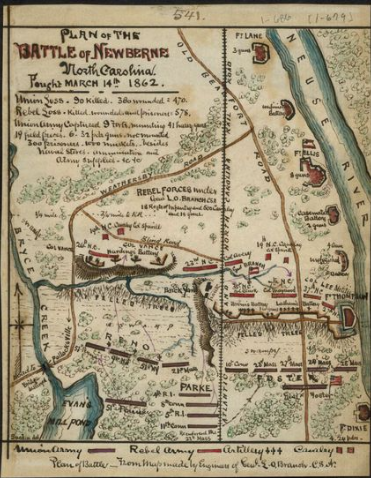 A small article appeared in the 13 Jan 1897 Daily Journal (New Bern, Wed. p.2) stating “Notice is hereby given that application will be made to the next General Assembly of the State of North Carolina to change and amend the Charter of the city of New Berne.” At the next meeting in 1897, the name of our city was officially changed to its current spelling, New Bern.  But what had been its official name prior and why did it change?

New Bern was founded in 1710 by Baron Christoph von Graffenried of Bern, Switzerland.   The Baron named it New Bern in honor of the city of his birth. In 1723, the General Assembly enacted that the place be “Incorporated into a Township, by the Name of Newbern… with all Privileges which ever have belonged to the said town, or shall hereafter be expressed, forever. (Laws of North Carolina, 1723-pg 204 Section XIII).

Although the official name was Newbern, it was not spelled that way on various maps, newspapers, and official documents, which led to much confusion over the years. On June 6, 1891, Henry Gannett, a famous geographer and mapmaker wrote to the City Clerk, William Oliver, and asked him about the true spelling of the name.

“Dear Sir, I find great uncertainty in spelling the name of your city.  It is spelled Newbern, Newberne, New Bern, New Berne and Newburn.  I take the liberty of appealing to you to inform us as fully as possible what the usage is in the official documents of the city.  In case you have documents at hand, I should be glad to know under what name the city is chartered”.

Oliver’s’ response was that “…up until 1862 the official name was spelled Newbern and it had been chartered as such.”  Oliver sent Gannett a copy of the “Acts of the General Assembly published in 1793” as proof.   Oliver referenced the fact that the town had been captured by Union forces and had been in the hands of Union troops for three years.  “The post office, and every office both town and county, the banks, the newspaper, were all in the hands of those who recently settled here.  The stamps at the post office at this time were changed from Newbern to New Berne as well as the newspaper and county offices.  This change was made by comparative strangers without a scintilla of law or authority.” (State Chronicle, July 23, 1891, p.4) Gannett subsequently settled upon Newbern as the official spelling.

In 1897 local businessman, James Augustus Bryan helped to initiate legislation to officially change the spelling again. The town continued to be referred to as Newberne which Bryan and others blamed upon Union soldiers for adding an “e” at the end. This led to the January 1893 notice in the paper that there was to be an application to change or amend the charter of the city of New Berne. This resulted in the General Assembly of NC action in February 1897 to establish that the “corporation heretofore existing as the city of Newbern shall hereafter be known and designated as the city of New Bern, and all laws in conflict with the above are hereby repealed.” Now you know when our city officially became New Bern.