On February 8, 1864 the 35th Regiment of the United States Colored Infantry was organized. This Regiment was formed from the 1st North Carolina Colored Volunteers established in New Bern in 1863.

At the beginning of the Civil War, African Americans were not permitted to serve in the armed forces of the United States. Congress passed both the Confiscation Act and the Militia Act in 1862 which allowed for the freeing of slaves if their owners were fighting against the Union, and allowed President Lincoln to use freed slaves in the armed services. In January 1863 the Emancipation Proclamation, claiming that all slaves residing within the rebellious states would be considered free, helped to spur recruitment of African American Regiments. On May 22, 1863 the US War Department issued General Order Number 143 which established the Bureau of Colored Troops.

During July 1863, the 1st Regiment NC Volunteers paraded on Academy Green in New Bern and presented their flag to Colonel Wild. The flag was designed by Mrs. Harriet Beecher Stowe, and the cost was $150 which was raised by the Colored Ladies' Aid Association of North Carolina in New Bern, under Mary Starkey. The flag was presented to General Wild who then presented it to Colonel James C. Beecher, half-brother of Harriet Beecher Stowe, who commanded the regiment. The success or failure of the 1st NCCV would help to decide if it were feasible or not to raise more African American troops. While the 1st NCCV did not win a major battle for the Union Army, it served with distinction and proved that African Americans could provide a fighting force to assist the Union Army.

After the formation of the 35th USCT in February of 1864, enlistment and training began in New Bern, and the troops headed further south. While in Georgia and South Carolina, they performed garrison duty and acted as laborers, but finally saw combat in Florida at the Battle of Olustee. Though this battle ended with a Union loss and high casualties for both sides, the men of the 35thUSCT fought gallantly and again demonstrated that African Americans were worthy participants in the armed services.

In the last two years of the war, 175 regiments containing 178,000 African American men saw service. In North Carolina, four regiments of over 5,000 soldiers were raised, including the 35th, 36th, and 37th USCT, as well as the 14th US Colored Heavy Artillery. The 35th USCT fought well and earned high praise on the battlefield. During the invasion in NC near Carolina Beach during the winter of 1864-1865, at least nine USCT regiments took place as part of the Union naval and army forces that captured Fort Fisher and forced the surrender of Wilmington.

A marker in honor of the 1st NCCV and subsequently the 35th USCT was dedicated and placed on Academy Green at Hancock and New Street. 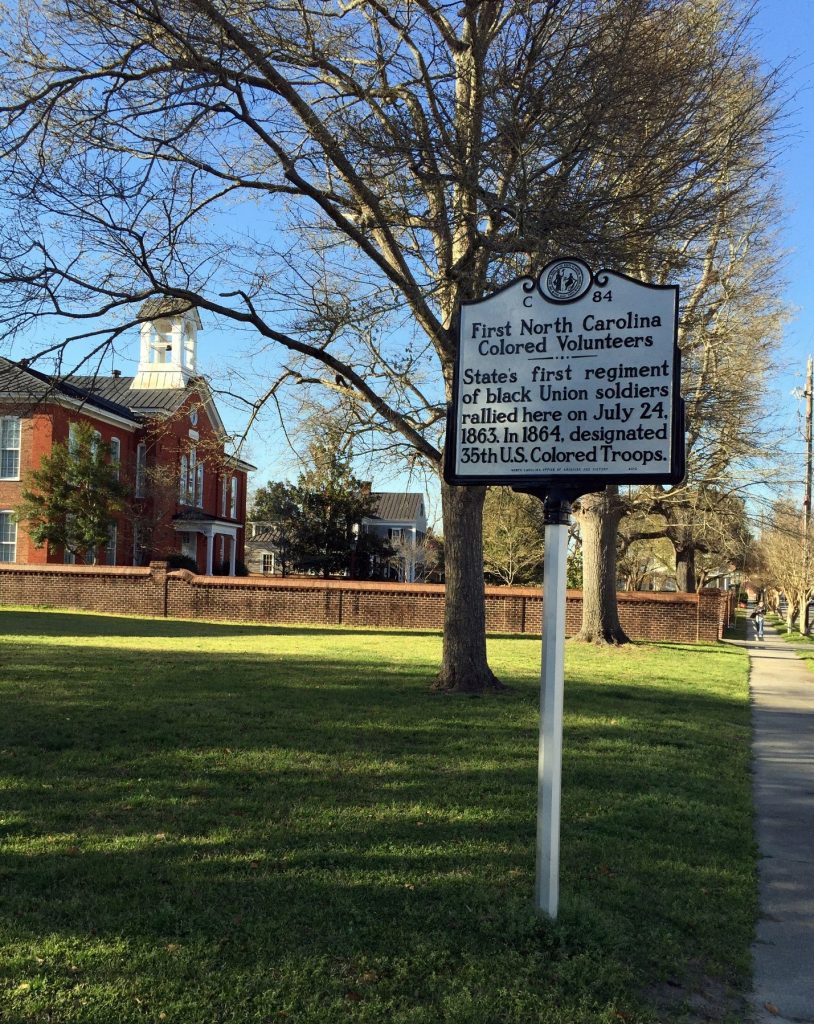