A Man With a Vision

New Bern’s history is replete with tales of ordinary men and women who do fascinating and extraordinary things. Our story this month is about a man whose visionary invention could have changed the course of history. Who was this man? Keep reading! 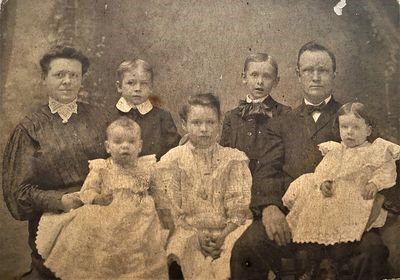 Gilbert and Margaret Waters and their young family in the Fall of 1906. Photo contributed by Jack Waters, Gilbert’s grandson.

Gilbert Stanley Waters was born on October 6, 1868, in Beaufort County, NC to Guilford and Julia Gaylord Waters. He worked on the family farm until age nineteen when he moved to New Bern to work in his brother-in-law’s buggy and carriage business on Broad Street. Gilbert’s parents and family soon followed. In April 1890 Gilbert convinced his father to purchase the business, and in March 1891 it became the “G.H. Waters & Son Buggy and Carriage Factory.” The same year Gilbert married Margaret Mae Scales of Raleigh, NC.

The G.H. Waters & Son factory was a busy and prosperous one. Four buggies or carriages were built and delivered each day. They had customers all over the country and as far away as the West Indies. In January 1892, they began building a new and larger factory at 78 Broad Street (site of the current New Bern Firemen’s Museum) and the family also moved to a new two-story residence next door at 80 Broad Street. 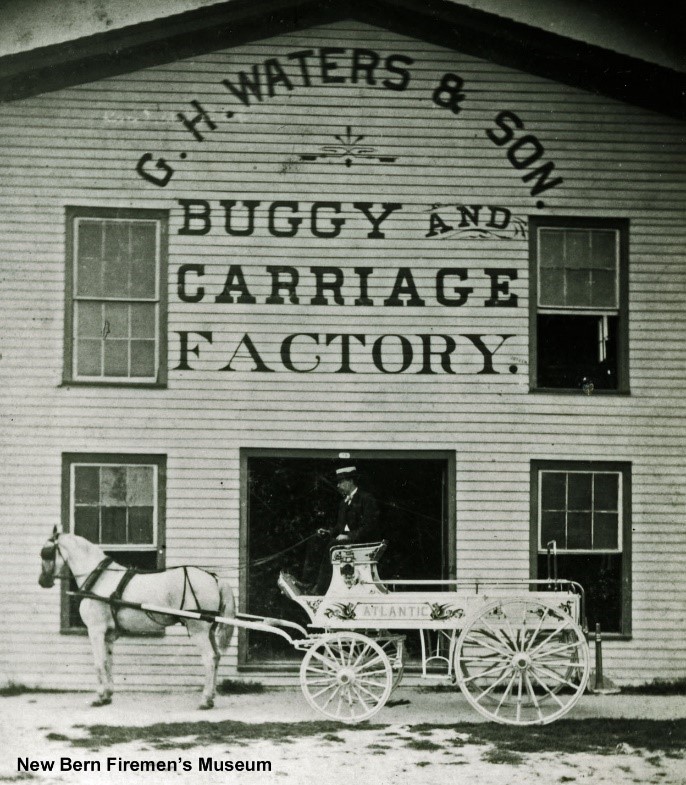 In 1899, Gilbert traveled to Baltimore, MD where he observed a steam powered buggy. He decided to develop a gasoline powered buggy, and when he returned to New Bern, he mounted a 5 horsepower, single cylinder gasoline engine on one of his buggies. He installed a tiller for steering and a chain drive to the rear axle, with bicycle type wheels. He called his vehicle a “Buggymobile.” It was the first gasoline powered vehicle built in the south. In 1900 he demonstrated his vehicle to crowds on Broad Street, scaring horses and people with its noise.

Gilbert had a vision for the sales of his gasoline powered buggy but the banks were unconvinced, deeming it impractical, too dangerous, and too expensive. His father told Gilbert that no one would be giving up their horse drawn buggies for his “contraption.” It is unknown whether any of them knew that across the country Henry Ford had just launched the Detroit Automobile Company after securing $150,000 in funding.

Guilford retired from the business in April 1903 and the name of the business changed to G S Waters and Sons. During this year, Gilbert built a more advanced model of his Buggymobile by adding a radiator and wooden spoke wheels. He continued to operate the family business until September 1917, when he sold and razed the homeplace and factory to make room for the new fire station. He moved his residence to 131 Broad Street, built a small factory next door and continued to sell buggy and carriage parts and later Corduroy Tires.

Photo circa 1939 of Mr. and Mrs. Waters in Buggymobile. Courtesy of New Bern-Craven County Library

On March 9, 1939, Gilbert was invited to appear on the nationally syndicated radio show “We the People” in New York, NY. Gilbert drove the Buggymobile around Times Square and Central Park carrying local celebrities, and then appeared on the show and started his Buggymobile to the pleasure and applause of the audience. Despite its popular appeal, he remained unable to find financial support to mass produce his invention. Sadly, the Buggymobile remained only an expensive toy.

Gilbert safely drove the 1903 model Buggymobile daily on the streets of New Bern into the late 1940’s. He later donated it to the North Carolina History Museum in Raleigh, where it remains on permanent exhibit. The Waters family had a plaque installed at the New Bern Firemen’s Museum in 2010 to commemorate the Buggymobile’s fascinating history.

On August 12, 2012, Gilbert Stanley Waters was posthumously inducted into the North Carolina Transportation Hall of Fame. He died on 15 Feb 1950 and is buried with his family in Cedar Grove Cemetery. His family continues to preserve his wonderful legacy. 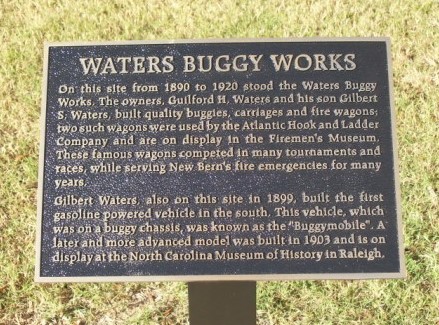 This plaque installed by the Waters' family outside the New Bern Firemen's Museum, former site of Waters' factory

Thank you to Jack Waters, grandson of Gilbert Waters, for giving us permission to share this information that he wrote in a biography of his grandfather. He has also shared many family photos for which we are most grateful.