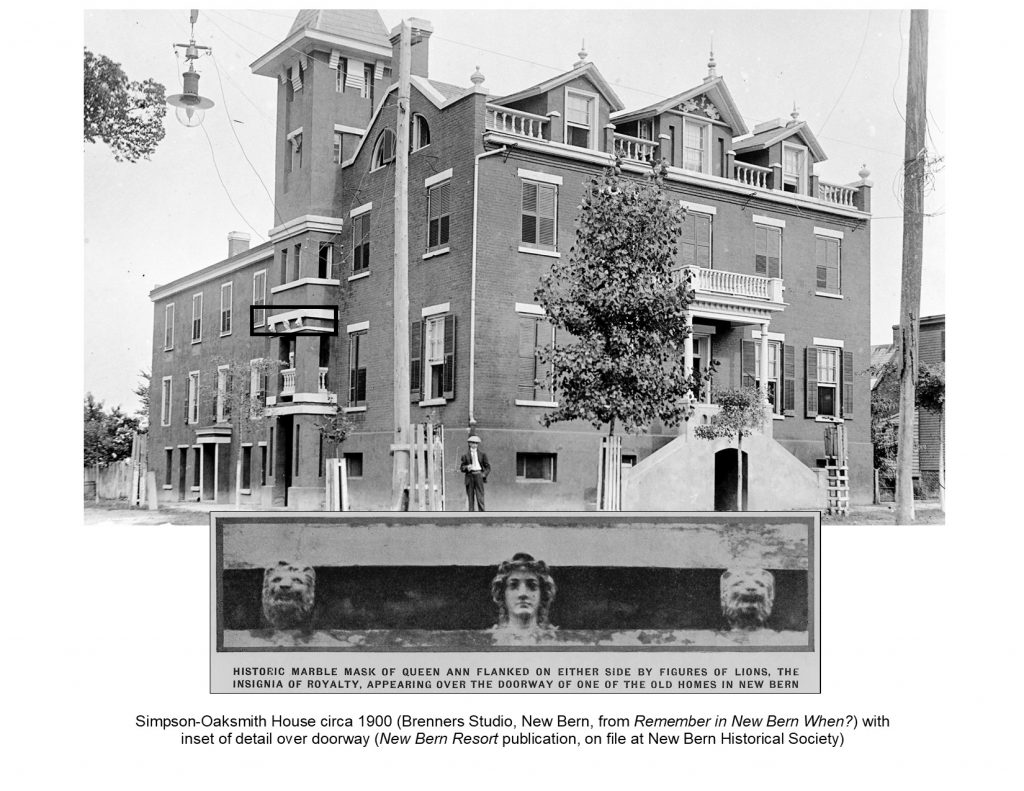 Appleton Oaksmith, one of the most eccentric characters in New Bern history, died this month in 1887. While he did not reside in New Bern, he was known here primarily due to his purchase and reconstruction of the Simpson house at 226 East Front Street. Later known as the Simpson-Oaksmith-Patterson House, this unique house has been the focus of more stories and traditional history than any other structure in New Bern.

Per the National Register of Historic Places, in 1810, Samuel Simpson purchased the original portion of the house which stood at the southeast corner of Pollock and East Front Streets. In 1843 a huge fire destroyed a good portion of the homes on Pollock Street and it appears that Simpson's federal style brick house was rebuilt between 1843-1846. (Sandbeck, Peter, The Historic Architecture of New Bern and Craven County, NC Architecture pgs.108-109, Tryon Palace Commission 1988). The house remained in the Simpson family until 1860 when it changed hands. During the Civil War, the house served as a Provost Marshal's office and jail. Appleton and Augusta Oaksmith purchased the home sometime in 1874 and after 1884 began operating the Vance Academy, a boarding and day school, in the house.

Between 1884 and 1887, Appleton Oaksmith began remodeling this house in a perplexing - if not bizarre - style. In 1888 George Nowitzky visited New Bern and described the house in this manner:

"The Greatest Architectural Curiosity in the South. It is formed by one of New Bern's oldest brick buildings (one has done duty as a jail), transformed into such a remarkable combination and blending of dormers, balconies, pinnacles, fantastic-looking tower, railings, human, griffin and dog heads as to make it a veritable architectural puzzle. No one knows what it was intended for, and the owner, apparently believing it is nobody's business, has failed to enlighten them."
(Green, John III, A New Bern Album, The Tryon Palace Commission, 1985 pg. 137)

The house was referred to by many as "Blackbeard's House" as there were rumors of a secret tunnel allowing the pirate to smuggle treasure. Blackbeard died long before the house was built, but the rumors persisted. Many speculated that Appleton Oaksmith used the secret tunnel for smuggling purposes. Some said that the house was fashioned after Morro Castle in Havana, but why, no one knew.

The storied house reflected Oaksmith's unconventional character. Appleton Oaksmith was an ambitious man, with vision, boldness and daring -- yet his ethics were questionable. He was a sea captain, writer, munitions supplier, soldier of fortune, slave trader, politician, blockade runner, entrepreneur, railroad speculator, and some said, a pirate.

Oaksmith was born in Portland, Maine in 1827 to literary and accomplished parents. Armed with fluency in four languages and a passion for arts and science, at the age of 16 Oaksmith set sail for China. Over the next few years he ventured to South America, the Caribbean and Africa while trading goods. He heavily financed military expeditions in Cuba and Nicaragua from 1855-1856 and lost a great deal of money. He dabbled in the magazine business, railroad speculation, paper mill ownership, and even Tammany Hall politics.

In 1861, Oaksmith was arrested, imprisoned, and convicted of slave trading. He was jailed in Boston but escaped from prison in 1862 with the help of friends who bribed the guards. He hid in his grandmother's home in Maine for a year where he fell in love with his cousin, Augusta Mason. This was problematic as he was married since 1855 to Isotta Rebecchini, an Italian musician who bore him four children.

Oaksmith sailed to England where he spent years in exile. Despite his fugitive status, he became a sea captain and blockade runner for the Confederacy, sailing from England to Texas. He was almost captured in 1864 when his ship was boarded by the Union Navy, but he managed to escape and return to England.

Oaksmith's personal life was as tumultuous as his checkered career. He filed for and obtained a divorce from his wife Isotta in 1866 without her knowledge. He then coerced her into giving up custody of their four children, vowing she would never see them again if she did not sign papers. Isotta reluctantly complied, but Appleton still allowed no contact with the children. He then married his cousin Augusta in Canada in 1867, with whom he had an additional eight children.

On a trip back to the US, Oaksmith landed in Beaufort, NC to make repairs to his ship. While there, he attended an auction and successfully bid $11.25 for property west of Morehead City, known as Becton Place. Oaksmith sailed back to England but finally in 1873 returned with his wife and children to make Carteret County their home. He hired locals to reconstruct a home from a building that had been a Union Army barracks. He purchased another 300 prime acres which includes nearly all of present-day Atlantic Beach and a portion of Pine Knoll Shores. He put all the property in the name of his wife and her sister, calling his vast estate Hollywood.

With the stigma of the slave-trading affair hanging over him, Oaksmith resolved to clear his name. Using an alias, he met with President Ulysses Grant. Oral history has it that after a short meeting, Grant was swayed to sign the pardon. When the President asked why his visitor pleaded so earnestly for this man, the audacious Oaksmith smugly replied, "Because I am Appleton Oaksmith."

In 1874 Oaksmith ran for the state House of Representatives from Carteret County which he won, serving one term. While in office, the visionary Oaksmith hatched many development plans for the county. He recommended dredging Beaufort Harbor and the Neuse River. He tried to acquire Fort Macon to serve as a resort hotel but when that failed, he then planned to develop the Atlantic Beach area into a seaside resort. Oaksmith was not able to obtain backing for his ambitious plans.

Business failures, sickness, and personal tragedy mark Oaksmith's last years. On July 4, 1879 he set sail for Beaufort on an outing in the family boat with six of his children, four girls and two boys ranging in age from 5-21. The boat capsized. None of the children could swim and the four girls tragically drowned. Son Ralph, age 17, told the Sheriff that his father had tried to drown them all, an accusation which Oaksmith vehemently denied. Authorities believed Oaksmith's account and Ralph left home, never to return.

After the loss, Oaksmith became reclusive; his mental and physical health declined. Suffering from unbearably painful malaria attacks, seizures, and even paralysis, he spent several years between home and NY hospitals. On October 29, 1887, in NY, Appleton Oaksmith died. His body was returned to Carteret County by train.

"… In many respects Captain Oaksmith was a remarkable man. A true history of his life would doubtless make an interesting little volume."

His widow Augusta Oaksmith sold the whimsical brick home in New Bern and it changed owners many times thereafter. In 1974, "The Greatest Architectural Curiosity in the South" was unceremoniously demolished, leaving today a gravel parking lot across from the Galley Stores and Marina gas pumps. Thus ends a very fanciful chapter in New Bern history.