During our 2nd New Bern Historical Society History Quest this year, we asked the children what historic destination they liked the best. The overwhelming response was “the clock.” What is this unique clock that has been a beloved part of the New Bern downtown landscape for over a century and turns one hundred and two years old this month?

The Baxter Clock on Pollock Street is representative of a street clock that was once a familiar feature in small towns and large cities across America. Street clocks were common in the mid 1800’s up until the early 20th century and were especially important in the early days as the average citizen could not afford a timepiece. Many times, the village jeweler provided the clock for the benefit of all but also used them as a unique form of advertising.

In 1892, E.B. Baxter opened a jewelry store on Middle Street in downtown New Bern. Dr. J.O. Baxter then purchased a building in 1917 at 323 Pollock Street for the sum of $20,000 and by 1920, the jewelry store had been moved to the Pollock Street address. Around that same time, J.O. Baxter purchased a four-dial post clock from the Seth Thomas Clock Company located in Thomaston, Connecticut.

“The Baxter clock was housed in an elaborate cast-iron sphere supported by a column resting on a square pedestal base. Completed on July 24, 1920, by the Seth Thomas Company… the clock was shipped to New Bern and erected that same year. The four faces of the clock were decorated with painted advertisements for Baxter’s establishment. The north and south faces advertised “Baxter the Jeweler,” while the east and west faces were painted with the “Dr. J.O. Baxter Eyesight Specialist.”  (Sandbeck, Peter, The Historic Architecture of New Bern and Craven County North Carolina, pg. 193)

The clock was installed on the Pollock Street sidewalk across from Christ Episcopal Church. The clock has always been called the Baxter Clock due to its association with the store. The following inscription is on the clock face: Seth Thomas No. 2139, July 24, 1920. The clock was electrified at the time of the installation and each face is illuminated. 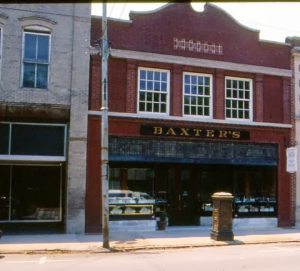 Over the years, the Baxter Clock has had its difficulties. The clock was added to the National Register of Historic Places on July 2, 1973. However, disaster struck on May 5, 1977, as a furniture truck backed into the truck and bent the pillar. The Baxter family hired a salvage company to lift the clock so that the pillar could be straightened, but as the crane lifted the clock, it dropped and shattered into many pieces when it hit the sidewalk. The owners were stunned, as was the City and State, as the clock was unique and much loved. The family was able to keep many of the parts that had dropped onto the street and made attempts to repair or replace the clock, but to no avail. The topless base of the clock remained on the sidewalk for fourteen years.

Swiss Bear became interested in restoring the clock as they recognized it was important to the downtown history of New Bern. The Baxter family agreed to give Swiss Bear ownership of the clock and its parts if they could raise funds to restore it to its original condition. The City of New Bern agreed to take ownership of the clock and any future maintenance if Swiss Bear were to raise the funds to restore it and coordinate the project. In 1990 Swiss Bear initiated a “Baxter Clock Restoration Campaign” which raised the requisite amount of $28,000 needed by the Verdin company in Ohio to restore the clock. Many school children contributed to this campaign. 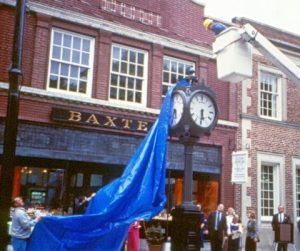 Upon completion, a dedication ceremony took place on April 20, 1991. When the time came to unveil the repaired clock, the guest speaker pulled on the ropes tied to a tarpaulin. The tarpaulin became impaled on the spire at the top of the clock, which began to tremble. Luckily, a Public Works employee was in a nearby truck, and with a cherry picker he was able to remove the tarp from the clock. Everyone was relieved and ownership of the clock was officially transferred to the City.

The Baxter family retired from the jewelry business and the building was sold, but the Baxter Clock remains a fixture in downtown New Bern. According to street clock historians, there were only seventy-one original four-post clocks manufactured by Seth Thomas. The number of these clocks that have survived is undetermined. Various sources indicate that the Baxter Clock is the only known clock of its type to have survived in North Carolina; some say one of four in the state or even across the country. What we know is the Baxter Clock continues to be loved by visitors and citizens alike and we hope it stands for another one hundred years.