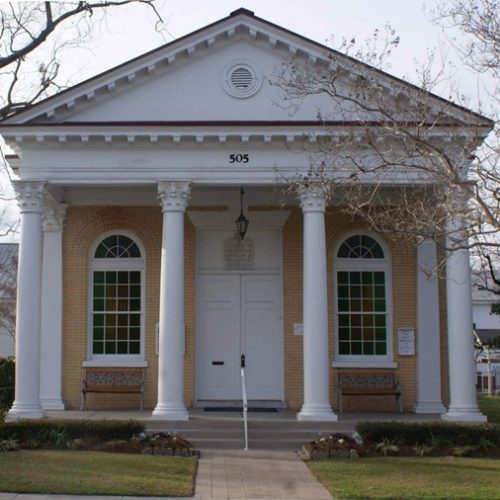 On August 31, 1908, the lights were turned on and a society wedding was conducted in a newly constructed religious institution in New Bern. The completion of that structure, Temple B’Nai Sholem at 505 Middle Street, as well as the Jewish history of New Bern, is an interesting and little-known story.

There are records of Jews in New Bern dating back to the 1700’s. By 1753, records show several Jewish residents were members of St. John’s Masonic Lodge on Hancock Street, including Abraham Cutten, Samuel Hart, Jacob Henry, and Jacob Sabiston. A number of Jewish merchants of Newport, Rhode Island traded with local Jews who owned cargo ships or who worked as shipping agents in the Caribbean as well as in local ports. In 1787, one of these local ship owners and New Bern resident, Abraham Nathan, owned the cargo ship Betsey. While traveling to Charleston, South Carolina with a trunk full of valuables, Nathan was killed and thrown overboard by an officer and four crewmen. His cargo was stolen but one of the crewmen confessed to the crime and all five were hanged.

Two years after this incident, Rabbi Jacob Abroo (Abreu), while traveling the world, came to New Bern to raise money for Yeshiva schools in Palestine. Unfortunately, he died while here and is said to have been buried in an old city cemetery that is now under Craven Street. Abroo’s visit suggests the presence of a number of Jewish residents here in New Bern.

Moving into the 19th century, by 1822 there were approximately thirty-one Jews reported to be living in New Bern. Many Jewish immigrants settled in New Bern during the later 19th century, most of whom were merchants. One of the more prominent Jewish residents of that era was Meyer Hahn, who moved to New Bern in 1864 and established a livery stable. He was elected Sheriff of Craven County three times and then was appointed collector of customs for the port of New Bern.

In 1877, New Bern Jews began to organize themselves due to a tragedy. Local merchant Oscar Marks and his wife Fannie had two young sons Lionel, age 3, and Bernard, age 5, who died within three days of each other during November of that year. On December 27, 1877, a group called the United Hebrews of New Bern purchased land for the sum of $100 from Isaac and Annie Hughes to establish a Jewish Cemetery located next to the New Bern National Cemetery. Many of the headstones there are carved in both English and Hebrew. The Jewish community began praying together, sometimes meeting above the Hahn’s grocery store and sometimes above Oscar Mark’s store. At one point the small congregation met at the Fire Department and sometimes at the Masonic Lodge.

By 1893 the Jewish congregation of Chester B’nai Sholem was established. Rabbi Kaiser from Petersburg, Virginia was hired to lead them. At that time there were twelve Jewish families which included fifty people. The congregation was named in honor of Chester Reizenstein, the son of Charles Reizenstein, one of the congregation’s trustees. Young Chester innocently asked his mother why they did not have a place to go for worship. The child passed away, and in his memory his name was added to the title of the congregation: Chester B’nai Sholem, meaning “Chester, Child of Peace.”

In 1894, the congregation purchased land at 505 Middle Street to erect a synagogue. For the next 14 years, the congregation continued to meet in various locations downtown. In 1907 they hired noted local architect Herbert Woodley Simpson to design a neo-classical styled temple. By 1908, the construction of the temple began and in four months for the sum of $5,000, the temple was completed. Simpson, by the way, also designed many distinguished New Bern buildings including the Centenary Methodist Church, St. Cyprian's Episcopal Church, the Athens Theatre, the Blades houses, and First Church of Christ, Scientist. 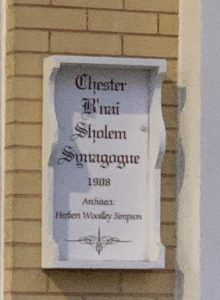 The congregation opened and met for the first time on August 31, for the wedding of Emma Sultan and Sigmund Josepthal. By the next month, High Holy Days were conducted. When the temple was dedicated, the Jewish population had grown to 125 people. The temple with its handsome Corinthian portico still stands proudly on Middle Street today. The congregation has remained small over the years but continues to be a strong and active religious community in New Bern.