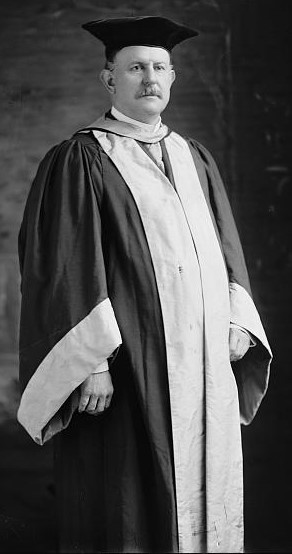 was named.  This is the story of diplomat, author, and legal scholar Hannis Taylor.

After the Union occupation of New Bern during March 1862, many local families fled the city and found themselves transplanted to other parts of the state or country.  Richard Nixon Taylor, a local merchant, his wife, Susan Stevenson, and six children were one such family.

Hannis Taylor, the couples' oldest son, was precocious and began school at the age of four.  He attended New Bern Academy until his family left the city due to the Civil War.  They eventually resided in Raleigh where Hannis entered the University of North Carolina in 1867.  Mr. Taylor's store failed, and financial constraints forced Hannis to withdraw nine months later.  The family returned to New Bern where Hannis served as a law clerk for John N. Washington.  However, during 1869 a large outbreak of tuberculosis claimed the life of his five-year-old sister Hannah as well as that of John Washington.  His mother contracted tuberculosis and was advised to move to a drier climate.  The Taylor family thus moved to Port Clear, Alabama where Mr. Taylor began work at a turpentine factory.  With the loss of his job and his wife's death, he was unable to function and young Hannis, at age 20, became the head of the household.

Hannis moved his father and siblings to Mobile Alabama.  He worked for a local law firm and his modest salary enabled him to rent a house for all.  Hannis had been raised as a Baptist in New Bern, but he began attending services at St. Mary's Catholic Church where he was introduced to 19-year-old Leonora LeBaron who he wed in 1878.

Hannis was admitted to the bar and practiced law in Mobile from 1870-1892.  He was admitted to practice at both the Alabama Supreme Court and the US Supreme Court.  He became the state solicitor for Baldwin County, Alabama, and rewrote the Mobile city charter, helping to keep the city from being liable for Reconstruction debts.  A prominent legal and political activist, he was named President of the Alabama State Bar, a position he held for several terms.

Taylor's scholarship and political activity led to his appointment by President Grover Cleveland as Minister to Spain from 1893-1897.  He had a keen knowledge of constitutional and international law; between 1897-1901 he completed his treatise on the Origin and Growth of the English, a study of the development of the English constitutional system and its growth to the Federal Republic of the U.S.  This work was adopted by many U.S. and European universities and law schools as a text or reference book, earning Taylor a reputation in international scholarship circles.  In recognition of his impressive work, he was granted the honorary degree of LLD from the University of Edinburgh, Dublin University and eight American universities.

Hannis ran unsuccessfully for the US House of Representatives from Alabama in 1898 and 1900.  He then moved his family to Washington DC. where he spent five years as an attorney and professor of law at Georgetown University, served as special adviser to the Spanish Treaty Claims Commission, and as American counsel to the Alaskan Boundary Tribunal.  A prodigious author, he published many scholarly articles for the North American Review and other prestigious journals.

On December 16, 1922 at the age of 71, Hannis Taylor died of Bright's disease and was buried at Fort Lincoln Cemetery in Maryland.  In 1943 a liberty ship was commissioned the SS Hannis Taylor in his honor.