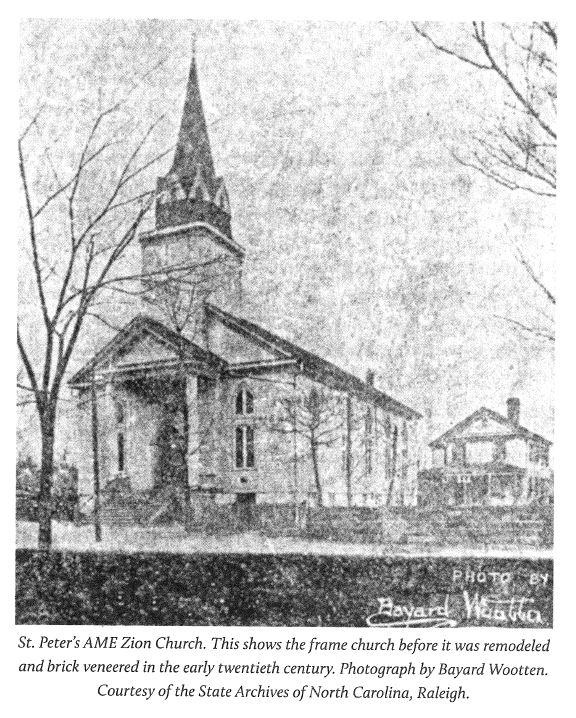 In February of 1902 an elderly black man died and his obituary was posted in the local newspaper.  He was born a slave and was greatly respected by blacks and whites.  Who was this man?

Thomas C. Battle an old and respected colored citizen died here yesterday and his funeral will be held at St. Peter's AME Zion Church, tomorrow at 9pm.  Battle was one of the founders of St. Peter's church after the war, and before the war was a member of Centenary Church of this city when whites and blacks both attended, he joining Centenary in 1848.  Battle was a brick mason, and has assisted in the construction of many buildings in this city.  He was about 78 years old.

Thomas Custis Battle Sr. was born into slavery in 1825.  Although enslaved, he was able to earn a living as a brick layer whose skills, like many other black artisans of the time, were in constant demand.  Thomas had twenty-six children from three relationships.  His last wife, Anna Vashti Velmar, also born into slavery, married him in 1869 while she was 19 and he was 45 and she would bear fifteen children.  As was custom among many artisans, Thomas passed many of his trade skills to his children, but he also encouraged their education.

Thomas saved his masonry income and purchased his emancipation as well as a home at 8 Primrose Street.  Thomas was self-educated and devoted to his Church.  In the 1800's the majority of blacks, whether free or enslaved, attended the Methodist meeting house on Hancock Street known as Andrew Chapel.  In 1843 there was a split in the church between northern and southern congregations due to the issue of slavery. The whites in New Bern constructed a new sanctuary and the blacks retained the old one.  After the Union occupation of New Bern, the church was renamed Andrews Chapel.  James Walker Hood was appointed missionary to North Carolina and led the movement which united Andrews Chapel with the AME Zion Church.  The black congregation focused on building a new church in the early 1870's when the whites informed the blacks they wanted to reclaim the Hancock Street building.  The church was completed and dedicated in 1886 as the St. Peter's AME Zion Church.  Bricklayer Thomas C. Battle Sr. was one of a number of artisan activists who became leaders in this new church and he soon became a Minister at St. Peter's.

Sadly, oppressive Jim Crow laws led many blacks to leave New Bern during the Great Migration north, including many of the Battle children.  One of Thomas' sons, Samuel Jesse Battle, broke the color barrier in New York City by becoming the first black police officer, Sergeant, Lieutenant and Parole Commissioner.