What Happened in New Bern in December 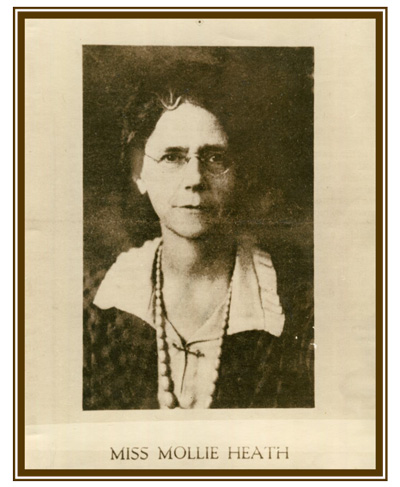 By Claudia Houston, New Bern Historical Society 2019
On December 5, 1984 the first Coastal Carolina Celebration Tree Lighting was held in downtown New Bern. The New Bern downtown area was in decline, but many remembered bygone Christmas seasons when Santa had a little house on Middle Street, there was always a parade, and the Mollie Heath Tree was decorated with lights. The Mollie Heath Tree was named for Miss Mary Hall Heath, a revered first grade schoolteacher who was so beloved by her students and community that in the first half of the nineteenth century, a special cedar tree was planted in her honor and memory in
the Christ Episcopal Church yard.

In September of 1984 a Swiss Bear Christmas Committee was organized and granted permission by Christ Church to decorate the Mollie Heath Tree. A Christmas Tree Lighting Ceremony was added to be held on the evening of December 5th. Strings of colored lights were donated and the City agreed to hang them on the tree.

Harold Talton, Chairman of Swiss Bear, agreed to be Santa Claus. The program was scheduled to begin at 5:30 pm with performances by the New Bern High School band and drill team, the Centenary Church Children's bell choir and others. Everyone was to then parade from Middle Street to the corner of Pollock Street with all singing "Here Comes Santa Claus." Two drill team members would pull Santa on the sleigh and when he arrived at the church corner, Reverend Ed Sharp, Rector of Christ Church, was to give a Christmas blessing and then Santa was to turn on the lights of the Mollie Heath Tree.

On the same day that the celebration was scheduled, it was learned that the City finished hanging wreaths on the light poles but had not yet turned on any of the lights contained in the wreaths. It was decided to connect the lighting of both the Christmas tree and the wreaths to a timer so that when Santa flipped a switch all the lights would go on.

At noon on December 5, the temperature began to drop, and it began to sleet. By 5 pm the children were freezing and crying and the musicians were having difficulty playing. It was decided to cut the performances and everyone paraded to the Pollock/Middle Street intersection. Reverend Sharp gave his blessing and everyone waited in anticipation but when Santa flicked the switch nothing happened. He tried again but again nothing happened. Finally someone realized that the timer had been set for the lights to go on at 6:30 pm, the intended time according to the original program. Since the initial part of the program was shortened, the lighting finale was 15 to 20 minutes early. Someone attempted to contact City Hall to move the timer ahead, but by the time this was accomplished, the freezing and disappointed crowd had dispersed. When the lights finally came on, only five people remained to see it.

The December 20, 1984 Swiss Bear Board minutes contained a brief entry… Christmas Committee-Agenda item #8…Linda Morris reported, "Our committee learned from our mistakes this year and will meet in January to plan for next year."

As you stroll through the streets of downtown New Bern during the holidays, be sure to stop by the Christ Church grounds at the corner of Middle and Pollock Streets, where the majestic Mollie Heath Tree still stands in all its glory, conjuring warm memories of Christmas past.

(Information for this article from the History of the Revitalization of Downtown New Bern NC blog, December 18, 2013 by Susan Moffat-Thomas)