During March of 1862 a meeting took place in New Bern which would have historical significance well after the end of the Civil War.  What was this meeting about and who were the participants?

When the Civil War began in 1861, regiments were formed in villages and towns.  As local and State militia were mustered into service, they were accompanied by their bands.  Bands were highly valued as they not only participated in ceremonies and parades but were helpful in recruiting soldiers and raising money. 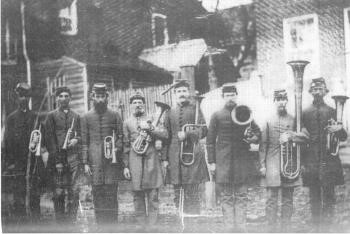 In Salem, North Carolina, the Salem Band was composed of Moravian Pacifists, German Methodists known for their musical prowess. The Captain of the Band, Samuel Timothy Mickey, wanted to enlist with a regiment to assist the Confederate cause.  The band was originally recruited by a North Carolina unit, Wheeler's Battalion, but that unit was captured at Roanoke Island by the Union Army.  In March of 1862 Captain Mickey met with Colonel Zebulon Vance at the Gaston Hotel in New Bern and requested that the band join the 26th North Carolina Infantry.  Vance agreed and the band became the 26th North Carolina Regimental Band.  There were originally eight members of the band, but they eventually became twelve.  They were the smallest band in either Army.

The band departed Salem on March 5, 1862 and headed for Camp Branch at New Bern.  The band was one of the best uniformed as they had non-regulation uniforms of Cadet jeans, brass buttons and capes.  The first engagement for the 26th North Carolina Infantry was at the Battle of New Bern on March 14, 1862.  The band was drilling and almost captured during this Confederate defeat, but the band evacuated to Goldsboro, later joined by the rest of the regiment.

Band members did not fight; they served as musicians or medical aides.  Their military duties included calls that announced the hours and duties of the day and transmitted orders while in camp or on the battlefield; and assisting surgeons by acting as stretcher bearers, clearing the field of wounded, acting as medics and burying the dead.

The 26th North Carolina Infantry and band initially stayed primarily in North Carolina but as the war progressed, found themselves engaged in battles at Malvern Hill, Gettysburg, the Wilderness and the defense of Petersburg, Virginia.  At Gettysburg, after the assault on Cemetery Ridge known as Pickett's Charge, the 26th North Carolina Infantry was decimated and suffered the greatest loss of any Confederate or Federal regiment on any day of the war.  As the survivors of the assault returned, the band played "Nearer my God to Thee."

After the evacuation of Petersburg, the band was captured near Amelia Courthouse, Virginia in the closing week of the war there.  They were imprisoned at Point Lookout, Maryland for three months.  They were released without their instruments and returned home to Salem on July 2, 1865.   However, they returned home with their band books -the only known complete set of band books from any Civil War Regiment.  This set of band books has great historical significance as a source of southern music and band history and is proudly owned by the Moravian Music Foundation, located in Winston-Salem, NC.