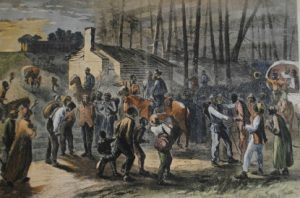 On June 30, 1863, the 35th United States Colored Troops regiment officially mustered in New Bern. The organizing and recruitment of North Carolina’s African-American troops had already been underway for nine months.

In July 1862, Congress issued a Second Confiscation and Militia Act. The act allowed President Abraham Lincoln to use as many African-Americans as he deemed necessary to suppress the South, and to use them in whatever way he thought best to accomplish that end. The use and treatment of African-Americans varied, and men were frequently assigned fatigue duty rather than combat. However, Lincoln did authorize African-Americans to assume combat roles in the January 1863 Emancipation Proclamation.

Courtesy of This Day in NC History.