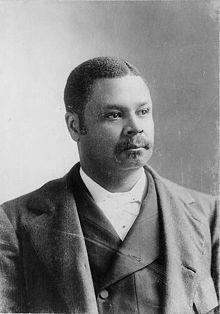 George Henry White (December 18, 1852 – December 28, 1918) was an American attorney and politician, elected as a Republican U.S. Congressman from North Carolina and serving between 1897 and 1901. He is considered the last African-American Congressman of the Jim Crow era, one of twenty to be elected in the late nineteenth century from the South. After White left office, no other black American would serve in Congress until Oscar De Priest was elected in 1928. No African American was elected to Congress from North Carolina until 1992. White delivered his famous Phoenix rising speech in the House on January 29, 1901:
“This is perhaps the Negroes’ temporary farewell to the American Congress, but let me say, Phoenix-like he will rise up some day and come again. These parting words are in behalf of an outraged, heart-broken, bruised and bleeding, but God-fearing people; faithful, industrious, loyal, rising people – full of potential force.”