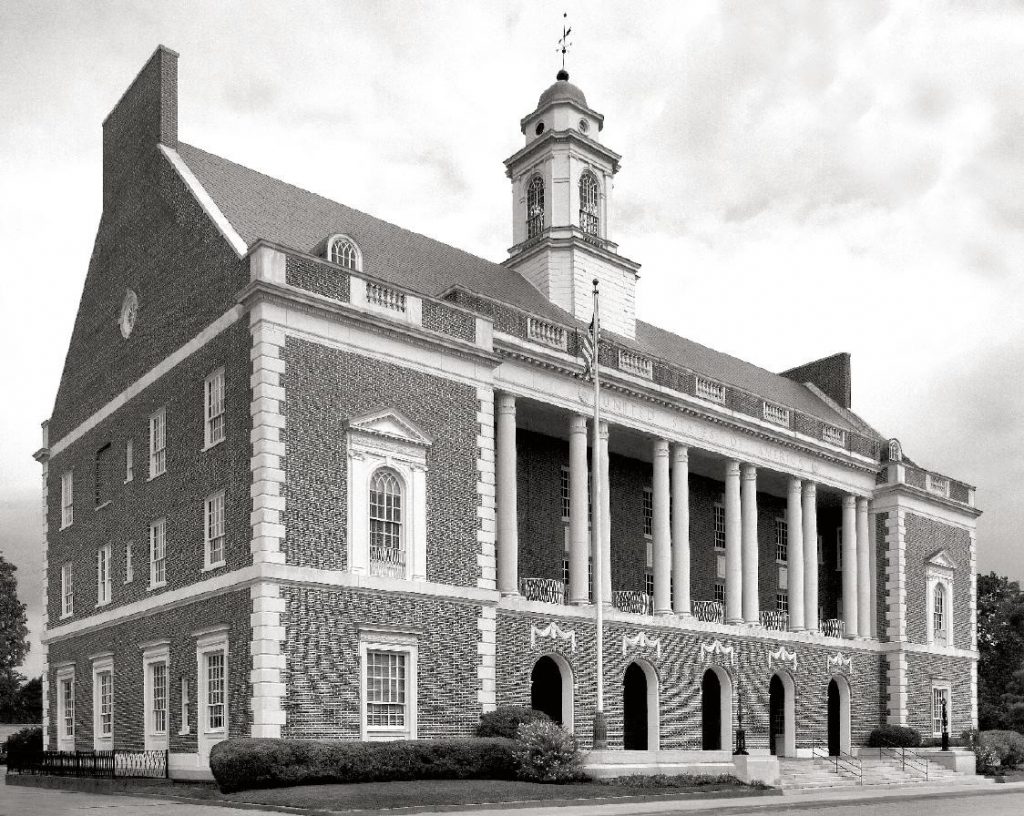 In the 1930's, comedian and witty political commentator Will Rogers was quite popular.  But during August of 1933, Rogers wrote a newspaper column about New Bern that created a furor.  What happened and why?

Over the years New Bern became a busy trading center and needed governmental services such as a post office and courthouse.  By the 1930's the town had outgrown the 1897 building at the corner of Pollock and Craven Streets, so the U.S. Department of Treasury decided to build at a new location on Middle Street.

The new building was designed by local architect Robert F. Smallwood in 1933 and was planned and built using costly decorative materials like marble and bronze.  By the time it opened on April 1, 1935 it cost just under $300,000, which made it one of the most expensive buildings in eastern Carolina.  Quick to spot government waste and extravagance, Will Rogers lambasted the cost of the building as well as the Congressman who obtained the funding for it, though professing to not know his name.  On August 27, 1933 he wrote in a national newspaper column,

"…how I ever overlooked a town that would demand a mail structure costing $260,249!  Well it just shows that I evidently overlooked the metropolis of that fine old state.  This name may hit you too as rather unique as your thoughts.  Go to a roster of North Carolina citadels.  It's New Bern, NC.  I repeat that, New Bern."  He then continued, "… an awful lot of people that like to write letters for no reason at all, and they seem to be in doubt as to who to write to, so I will ask anyone in that state of mental incapacity to please write to New Bern, NC.  I hate to see a $260,249 post office not be slightly used anyhow.  Now naturally the town (or city rather) being new to you, you won't know who to write to.  Well in that case I would write to their Congressman.  I don't know his name now, but he will become famous in a very short time, for he will not doubt have the capitol at Washington moved there."

Making fun of Congressman Charles Abernathy was one thing, but making fun of the town was quite another.  Residents flooded Rogers with letters that included Alderman John F. Rhodes, whose letter was posted on the front page of the New Bern Tribune on August 29, 1933.  "It is a matter of keen regret that one so well read and extraordinarily traveled as yourself should have missed our fair city, the Athens of North Carolina.  City Clerk is taking steps immediately to see this phase of your education is not longer neglected.  You will receive literature on New Bern by airmail.  We extend you invitation to be present at dedication of our post office unless old age prevents you from making trip."

Rogers did post a public response but it did little to appease the hurt and indignant townspeople.  Will Rogers did not attend the dedication of the Federal Building nor did he ever visit New Bern.  It should be noted, however, that in 1973 this architecturally significant building was placed on the National Register of Historic Places and still stands proudly today at 413 Middle Street.