What Happened in New Bern in April

Cullen Andrews Battle was born in Georgia, grew up in Alabama, died in Greensboro, NC, and was buried in Virginia.  Yet nearly three decades after his death on April 8, 1905, a temporary Army camp at Glenburnie Park, New Bern, was named in his honor - Camp Battle.  What was this man's connection to New Bern?

Cullen A. Battle was born in Georgia in 1829 and raised in Alabama, graduating from the University of Alabama.  He practiced law and politics until Alabama seceded from the Union in 1861.  Battle raised a company of volunteers and joined the Third Alabama Regiment, fighting valiantly in many Civil War battles.  He was promoted to Brigadier General after his gallantry at Gettysburg.  After the war, he returned to Alabama to resume his law practice, and though elected to Congress, he was prevented from taking his seat.

Battle's son, Henry Wilson Battle, became pastor of the First Baptist Church in New Bern in January 1888.  General Battle joined his son in New Bern and for a short period of time, edited the New Bern Sun Journal.  He was elected Mayor by New Bern councilmen on 8 May 1890 even though he had not requested the office nor was he told about his nomination.  He was a popular Mayor and an eloquent speaker.  General Battle later followed his son Henry to Greensboro, NC, where he died.

Thirty-eight years later, Camp Battle, located approximately two miles northwest of the city of New Bern, NC was named in honor of General Cullen Battle.  The Eastern Carolina Fair Association had owned and used the property for local fairs until 1919 when the City of New Bern purchased the land from them for $15,000.  The property was then used as a city park until 1942 when the US Army leased approximately 70 acres of Glenburnie Park from the City of New Bern for $1 a year.

In 1942 the 1st Infantry Regiment was sent to Camp Battle to guard the Neuse and Trent River Bridges.  Their mission was to patrol installations in the area, including Cherry Point and Camp Lejeune.  Lieutenant Colonel Wilson Stephenson, the commanding officer, officially named the encampment Camp Battle.  The Camp could house 753 military personnel.  Improvements to the Camp were made by the government at a cost of $193,300 and included 85 wood frame buildings such as barracks, supply rooms, latrines, and mess halls.

On June 20th, 1944, Camp Battle became a German Prisoner of War Camp where more than 600 POW's were sent and housed.  The POW camp was solely under DOD control during the period of their lease and use.  In November 1946, the lease was cancelled.

The site of Camp Battle is presently used as Glenburnie Park. There are no remnants of the camp itself; however one of the picnic shelters at the park may have the foundation of one of the Camp Battle buildings.  A historical plaque commemorating the camp was placed inside the park with the assistance of an Eagle Scout in 2009. 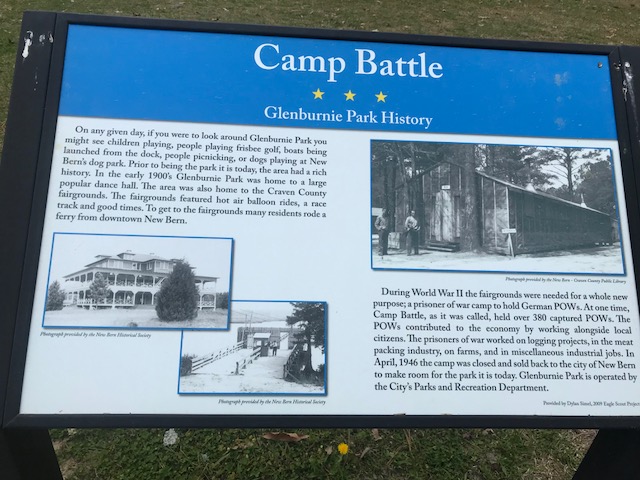