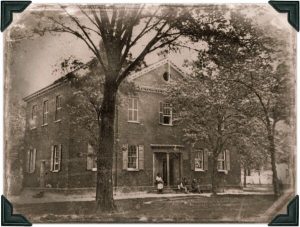 Experience New Bern’s Occupation through the eyes of African Americans, Confederates, Union soldiers, and women caught between both North and South with this fascinating new exhibit at the New Bern Academy Museum. Spanning the March 1862 invasion of Burnside’s forces, through the devastation of the 1864 yellow fever epidemic, “Face to Face” reveals the daily lives of both military officials and citizens under their rule through artifacts, audiovisual panels, compelling stories, and period images. Medicine, emancipation, education, espionage, and traditional mourning of the dead are some of the themes explored through the framework of wartime and its challenges. This exhibit brings together sketches by soldier-artists, including Tryon Palace’s own Fred W. Smith collection,  portraying scenes of civilian and camp life. You will even have the opportunity to discover some local Civil War artifacts, including:

The New Bern Academy Museum is located in an 1809 building in the heart of New Bern’s historic residential district.  Originally a school house for both boys and girls, the New Bern Academy served as a hospital in the Civil War and in 1899 became part of the New Bern graded school system which used it for classes until 1971.  Today, the Academy building’s original classrooms are home to four permanent exhibits focused on the Civil War, New Bern Architecture, and the history of the building itself. Admission is FREE!

The exhibit is is partnership between Tryon Palace, Tryon Palace Foundation, The North Carolina Department of Cultural Resources and the New Bern Historical Society